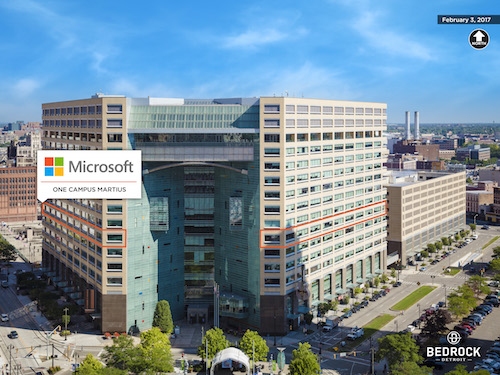 According to research compiled by JLL Research, a team that creates reports on commercial real estate dynamics, metro Detroit saw 470,000 square feet of leases signed in the first quarter of 2017, including several high-profile tenants such as Microsoft’s 40,000-square-foot tech center in the Central Business District, and the long-awaited Hudson’s Block Plan by Bedrock. The mixed-use plan includes approximately 280,000 square feet of office space spread across 70,000-square-foot floor places, which would be among the largest in Downtown Detroit.

Additionally, an office space is both delivered and proposed in Downtown Detroit, experts at JLL anticipate an increase in rent prices. The report indicated that average asking rent for Detroit office space is currently $19.66 per square foot.

“Rents may not yet make a big jump, but that certainly looms over the downtown office market with the new development projects currently in the pipeline and large-scale renovations underway,” says the report. “We can expect capital markets transactions in metro Detroit to pick up moving forward, as we have seen properties trade both downtown (Ford Building) and in the suburbs (North Troy Corporate Park, Delphi in Troy) in the first quarter and conditions continue to improve.”

JLL expects capital markets transaction activity to gain momentum through the rest of the year, as market conditions continue to improve. A full version of the report can be read here.