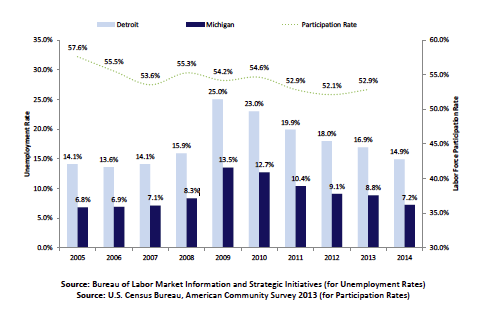 Unemployment rates in the city of Detroit have dropped to almost half the levels at the height of the recession in 2009, however, hiring levels in the region continue to remain below levels found before the recession began in 2007, says a new report by the Michigan Bureau of Labor Market Initiatives and Strategic Initiatives.

“Significant job losses were seen in manufacturing, administrative and waste services, and transportation,” say Leonidas Murembya and Eric Guthrie, authors of Demographic and Labor Market Profile: Detroit City. “These job reductions reflected the impact of the Great Recession on, among other sectors, the auto sector and financial sector.”

The report found the manufacturing industry in Wayne County has recovered about half of the jobs lost during the recession, while administrative employment rose by about 8,500 and food services gained about 7,000 jobs since 2010.

The report says Detroit companies looking to hire the most are in the health care, auto, and banking industries.

Murembya and Guthrie say jobs advertised online grew by almost 60 percent since 2011 in the city of Detroit, a trend that was also observed statewide.