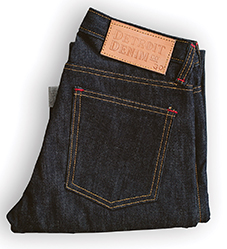 A former electric supply building near Stroh River Place in Detroit that dates back to 1906 has been renovated by a private investment group and will soon offer space to CAM, a purveyor of specialty foods in Birmingham, and Detroit Denim Co., which is moving from Corktown, among other tenants.

“I started Detroit Denim in my basement and garage, and that lasted a week before I spent an entire summer looking for space for what I refer to as a hobby shop, but an intense one,” says Eric Yelsma, founder of Detroit Denim, which he co-owns with Brenna Lane and Steve Wisinski.

Operating out of Ponyride since 2011, a shared space in a former warehouse in Corktown for socially-conscious artists and entrepreneurs, Detroit Denim produces an array of American-sourced and Detroit-produced custom fit, ready-to-wear, and limited special run jeans as well as shirts, crewnecks, belts, doorman key fobs, leather and brass key chains, and aprons.

“We design, cut, sew, finish, fit, and sell jeans that retail for $250 a pair,” Yelsma says. “Our primary market is men, and we will start doing women’s jeans when we move into our new space in March (with a grand opening in April.) We have six employees, and we plan to have up to 15 employees down the road.” 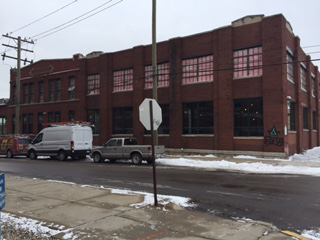 Detroit Denim’s new operation, to be located at 2987 Franklin (at Mcdougall), will occupy 4,300 square feet of space, including a 1,000-square-foot store. A glass wall will separate the remaining space where visitors can see the “factory and manufacturing area,” Yelsma says. “We also plan to add other U.S.-made accessories to complement our existing product lines.”

In turn, CAM (Collaborative Advantage Marketing) will move in the coming weeks into the former Dongan Electric Manufacturing Co., that has since moved to Fraser. The company is a U.S. importer of specialty foods including Falksalt, a line of natural sea salt flakes offered in a variety of flavors.

In addition to Detroit Denim and CAM, the ownership group of 2987 Franklin is looking to draw a restaurant, office users, and residential loft tenants. The two-story, 22,000-square-foot structure will also be used for art shows and community events. A third story could be added, as well.

“The building has been immaculately restored, and really shows as Class A space,” says Jay Lambrecht, broker and owner of Lambrecht Realty in Detroit, which brokered the sale of the building and is handling leasing. “The location is two blocks from the Riverwalk, and a quarter of a mile from Belle Isle. You’re beginning to see a great resurgence of activity in that area in terms of new investment.”