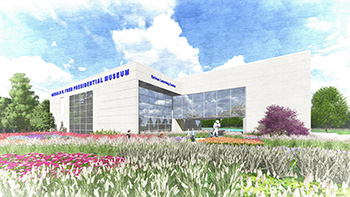 Renovations to the Gerald R. Ford Presidential Museum in Grand Rapids and the new, 8,000-square-foot DeVos Learning Center will be completed by early next month in time for opening gala and re-dedication events.

More than $15 million in private funds was raised to build the learning center, redesign the museum and its exhibits, and to create global access to many of President Ford’s important documents from when he served in Congress and the White House.

“Many of the exhibits will be brought to life through video, scenic re-creations, digital interaction, historical artifacts, and text-based storylines,” she says.

Didier says progress on the construction of the museum, located at 303 Pearl St. NW, was facilitated by the season’s mild winter. 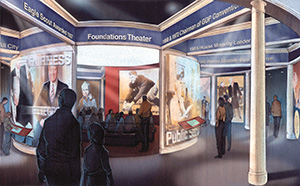 The Gerald R. Ford Presidential Museum was dedicated in 1981, and then updated in 1996. It is the site of President and Mrs. Ford’s final resting place.

To celebrate the completion of both projects, tickets are now on sale for a pre-opening gala event, to be held on June 6 at the J.W. Marriott Hotel in downtown Grand Rapids.

“Members of the Ford family, several members of President Ford’s cabinet, foundation trustees, and local, state, and federal leaders are expected to attend the gala,” says Joseph Calvaruso, executive director of the Gerald R. Ford Presidential Foundation. “We are planning for a very special evening to celebrate both the launch of the DeVos Learning Center and the newly renovated Gerald R. Ford Presidential Museum, while honoring the legacy of President and Mrs. Ford.”

Additionally, a ribbon-cutting and grand opening of the learning center and re-dedication of the museum will be held on June 7.

To purchase tickets to the gala event, email rsvp@38foundation.org.