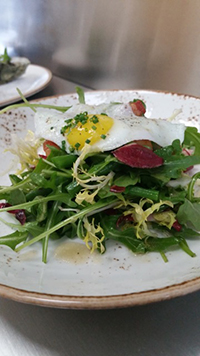 After a four-year meticulous, period-correct renovation of The Chapman House in downtown Rochester, the historic home will reopen in late May as a restaurant offering cuisine featuring local ingredients prepared with French culinary techniques.

The Chapman House, a well-known building in the Rochester community located at 311 Walnut Blvd., two blocks west of Rochester Road, is nearing the final stages of its transformation into a restaurant and event space. The 5,000-square-foot Chapman House, built 1916, was constructed in the Italian Renaissance style and features stone, stucco, and marble. Chapman House proprietor Geoffrey Dancik bought the home in 2011 and began renovations a year later.

“It’s something completely different,” Dancik says. “Our hope is that we complement what’s already in town. It’s important that this feels like it’s a part of the community, and we hope people feel that too. (We want) people to feel that they can come here for a small bite to eat after work or come grab dinner. We don’t want it to just be for special occasions.”

Dancik worked meticulously to maintain the original architects’ vision, including cutting the baseboard and molding to the original specifications and matching the tile on the front and back porch to the original. The space has light colored walls and trim with dark hardwood floors, an intentionally neutral palate to allow guests to “focus on the details of (the renovations) and the food,” Dancik says. 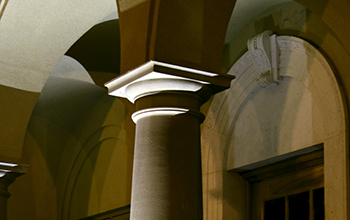 The restaurant will offer seating for 115 guests in four rooms both upstairs and downstairs, along with 45 seats on the outdoor patio, and room for 100 people in the rear in the property for private parties. Additions to the indoor space include a wine tasting room in the basement, a standing room-only bar on the first floor that includes a baby grand piano.

Dancik designed the rear of the property to appeal to a wide range of private events, adding in a “heavily landscaped (garden) with more of a formal French garden aesthetic,” and two pétanque courts, similar to bocce ball.

The menu, designed by Chef Chris Cason, a former sous chef at Roast in downtown Detroit, will be written daily based on current market availability.

“When we say seasonality, we mean week by week, not necessarily four block seasons,” Cason says. “We’re trying to do our innovative expression of the French gastronomic tradition…”

He says dishes include an endive salad made with a few different types of endives, a sunny-side up egg, house-made bacon, and asparagus, along with a hand-cut pappardelle with duck ragu, fresh fava beans, herbs, and pecorino toscano.

Cason says The Chapman House is working with about 11 local farmers and purveyors, including Yale-based Melo Farms for eggs, Northville’s Guernsey Farms Dairy, and Detroit-based RecoveryPark Farms for greens.

He says the drink menu is still in development, but will include a variety of craft beer, wine, and a curated cocktail list.

“What we’re trying to do is really offer an experience,” Dancik says. “The culinary aspect is certainly the focus of that experience. With that being said, the experience is multi-faceted. There’s been an acute level of attention dedicated to the atmosphere, service, and fostering enjoyable conversation. Our aim is to hit on all those points and do them really well, and not be intimidating at the same point.”

The Chapman House, built for William Clark Chapman, co-owner of Western Knitting Mills and president of the Rochester Savings Bank, remained in the Chapman family until 1973, when it was sold for commercial use. The home was previously occupied by the interior design firm McGowen Associates Inc. and Chapman House, a home furnishings store.