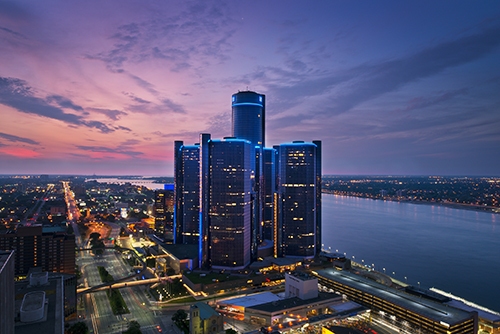 The Detroit Marriott at the Renaissance Center in Detroit today announced the completion of a $30 million renovation project that updated nearly 1,300 guest rooms, and concluded in December with the remodel of meeting room space, a two-level concierge lounge, and 52 suites.

“We are so very proud to unveil our modernized, beautiful new look and look forward to welcoming the community as well as visitors from around the world to our Michigan landmark property,” says Shonda Johnson, the hotel’s area general manager.

The 70-floor hotel remained open throughout the one-year project. Only a few floors of guest rooms underwent reconstruction at a time, and meeting space remodeling was done in phases to enable group functions to continue without disruption, Johnson says.

Company officials note that the hotel’s makeover is part of Marriott Hotels’ current brand transformation “to reflect the lifestyle of the next generation of travelers who seamlessly blend work and play in a mobile and global world.”

For that reason, the renovation also included the addition of several new tech amenities, including free Internet access for Marriot Rewards members and, in select suites, Bluetooth technology that syncs with a guest’s mobile device and delivers music through speakers mounted in the bed.

Additionally, the Detroit Marriott is one of 29 Marriott hotels in a pilot program to provide Kube Systems’ portable charging stations in its lobbies, allowing guests to more conveniently charge devices including iPhones, Android devices, and iPads. The building also features touchscreen electronic reader boards that provide details about hotel events and are equipped with way-finding capability within the Renaissance Center complex.