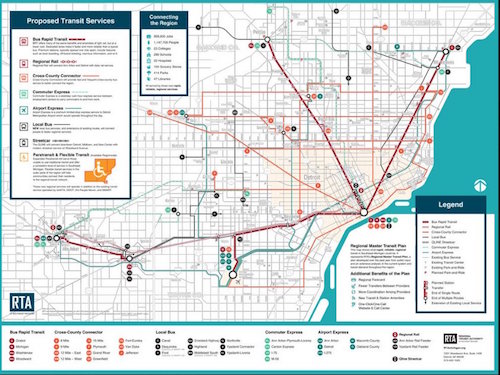 A proposal to pass the Regional Master Transit Plan — a $4.7 billion project that would create a rapid regional public transit system in southeast Michigan — has been voted down after appearing on yesterday’s ballot in Macomb, Oakland, Washtenaw, and Wayne Counties.

The passing of the proposal would have authorized the Regional Transit Authority of Southeast Michigan to levy a tax assessment within the counties at a rate of $1.2 million for 20 years beginning in 2016 and ending in 2035 to complete the transit project.

It was estimated by the RTA that about $160 million would have been collected in the first year.

“The extremely narrow defeat of the proposed millage for regional transit is a deeply disappointing setback for efforts to create a modern transit system that would position southeast Michigan to be a stronger competitor in the 21st century both nationally and internationally,” say Paul Hillegonds, board chairperson of the RTA, and Michael Ford, CEO of the RTA, in a statement released today. “…Still, the fact remains that we have made significant progress over the last 18 months in developing a truly regional plan that meets the needs of the people and communities of this region. And the narrow margin of defeat indicates that many of our residents recognize the value of the plan and the region’s needs for it.

The RTA was created in 2012 to plan for and coordinate public transportation for the region, including a plan for rapid transit. It has a 10-member board whose members are appointed for three-year terms by the county executives of Wayne, Oakland, and Macomb counties, the chair of the Washtenaw County Board of Commissioners, the mayor of Detroit, and the governor of Michigan.

Hillegonds and Ford say the Regional Transit Authority board will be sitting down in the near future to determine the next steps in fulfilling its tasks.

The Regional Master Transit Plan would have included the construction of a bus line with attributes similar to a light rail along several corridors throughout metro Detroit, a regional rail service from Detroit to Ann Arbor, and new cross county connector and commuter express bus routes.

The plan also included the addition of new local services that connect communities with no existing transit into the regional network, improved transit services for seniors and people with disabilities, express transit service to Detroit Metro Airport, a universal transit fare card, increased frequency and longer spans of service, and more.

“To say we’re disappointed is an understatement,” says Sandy Baruah, president of The Detroit Regional Chamber. “However, we respect the will of the voters and will continue to seek solutions to connect our region and provide mobility to those without access to personal vehicles.”