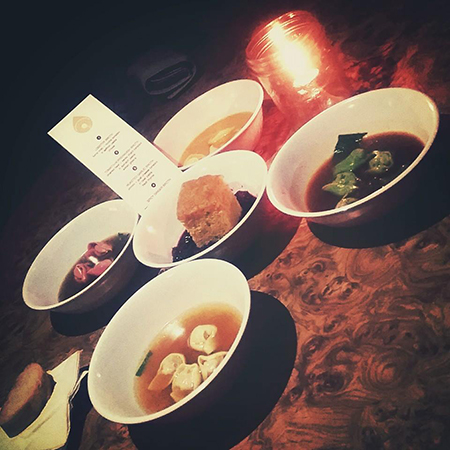 “There are a couple of places that host pop-ups in the city, but I think what makes us a little bit different is that our space is dedicated to this,” says Steven Reaume, manager of Pop, which seats 60, with overflow seating available downstairs. “It’s a space for people with little resources to come in and show their art.”

And the medium of that art varies event-to-event. Today, for instance, kicks off Pop’s weekly food-centered pop-ups, which will be held each Thursday. Starting next week and running through the rest of the month, Slipstream Theatre will host an original theatrical production at 7 p.m. Sunday through Wednesday. The venue is also in talks with Detroit-based Offworld Arcade about bringing in a pop-up arcade.

“There’s going to be a lot of people who have become known for their pop-ups, like Salt and Acid, for example, but we’re also encouraging talented people in the city to come in and give it a shot,” Reaume says. “We’re finding that there are a lot of people who want to do this kind of thing, but really don’t know how to proceed or don’t have the space to do it. We want to mentor them and help them through it.”

To begin, Pop will host Ragu, a pasta pop-up designed and led by Reaume himself. The event, offering four kinds of rigatoni paired with four stewed sauces, will offer menu options including braised rabbit ragu with porcini rigatoni, and freshwater fish ragu with lemon rigatoni.

The event, which begins at 8 p.m., will also feature local DJs RJ Stefanski and Tyler Yglesias of Submixxive. “We encouraging all of the pop-ups to have some kind of music or entertainment to go along with the food so there’s a little bit more going on,” Reaume says, noting that next week’s Napá Boulé, a Haitin pop-up, will bring in world music played by a live DJ.

For more information about Pop and upcoming events, visit checkerbar.com. To inquire about hosting a future pop-up, email tyler@grandtrunkpub.com.