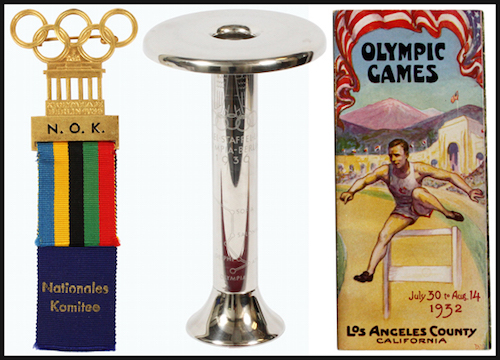 A 2,000 piece vintage collection of Olympic memorabilia, which includes rare items from games extending as far back as 1908, is set to go to auction tomorrow at DuMouchelles Art Galleries in Detroit.

“Of particular interest to bidders is a 1936 relay bearer’s torch,” says Jerry Anderson, an appraiser for DuMouchelles. “The 1936 games were historic as the first in modern times to conduct a torch relay from Olympia in Greece to the site of the games.”

Other items to be featured at the auction include: programs and brochures from the 1932 Los Angeles games, a vintage postcard collection, event tickets, participation medals, handmade books, a 3-D stereoscope viewer with slides, and autographed photos of American diver Marjorie Gestring, who became the youngest female gold medalist in the history of the summer games when she competed at the age of 13 in 1936.

A collection of over 1,900 pins, including a unique set of pins designed by countries that unsuccessfully vied for the 2004 games, will also be up for auction. Limited amounts of these pins, which were traded among athletes, were made.

The collection is currently on view at the art gallery, located at 409 E. Jefferson Ave., until it goes to auction at 6:30 p.m. Friday.