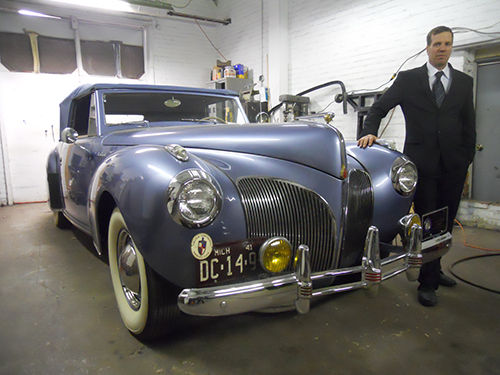 When Edsel Ford took delivery of his personal Lincoln Continental Cabriolet on this day 75 years ago, the prototype was never intended for mass production. But soon after friends and customers clamored for a production model of the radical two-door prototype.

In celebration of the anniversary, Dennis Pillon, owner and restorer at Design 2 Classics and Restoration Academy, both located on site at the Ford Piquette Plant near I-75 and E. Grand Boulevard (where the Model T was designed in 1908), completed a five-year restoration of an early production model that will take part in a tour of Detroit before being returned to the Ford family for their use.

“When you look at the roster of the early buyers of the 1941 models, you see names like Jackie Cooper, Clark Gable, Mickey Rooney, Babe Ruth, John Wayne, and Joe Louis (the boxer’s Lincoln was sold a few years back for $400,000),” Pillon says. “There were only 404 Lincoln Continental Cabriolets from 1941 ever built because of the advent of World War II.

“The Lincoln we restored was found in a barn in Pennsylvania, and it was in several pieces. The prototype that Edsel had was destroyed, as was a second model. The production vehicles were pulled off the line at the (former) Lincoln factory (at Warren and Livernois in Detroit) and then customized.”

Pillon hoped to have the restored vehicle on display for this weekend’s Autorama at Cobo Center, but he ran out of time. “We’ve restored a lot of hand-built, aluminum body cars, we do classic cars and muscle cars, including those from Ferrari, Packard, Duesenberg, and many others, but the ’41 Lincoln was unlike anything else. We hope there will be a public display of the car this summer.”