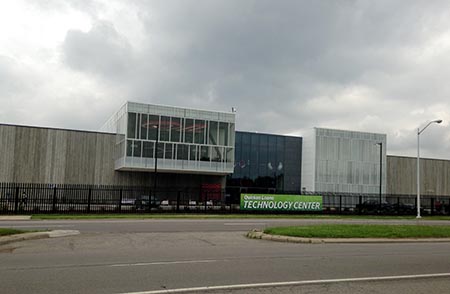 “(Quicken Loans’) impact over the last five years was buying (and renovating) these architectural gems (in the city of Detroit),” says Dan Gilbert, founder and chairman of Quicken Loans. “The 2.0 version of our impact, we believe, is going to be new construction. For a city to really get there, you have to have cranes in the air.”

Business leaders were invited to tour the 66,000-square-foot center at a grand opening ceremony today attended by more than 100 employees, guests, and the media. The center, at 1401 Rosa Parks Blvd., has two 10,000-square-foot server rooms, along with training, office, and support space. The largest conference room seats 30 and has a view of downtown Detroit, where Quicken Loans, Rock Ventures, and some of Gilbert’s other companies are headquartered.

“This new era (of post-bankruptcy Detroit) is going to be based on technology,” Gilbert says. “For Detroit to become the city we all envision, it has to come from a technology center.”

Special features in the technology center include: a break room with five nap bunkers, slushie and cappuccino machines, showers, rotating and moveable walls in the main office space, a decorative wall made from recycled skateboards, face-recognition and biometric security systems, a multi-color LED light staircase, a pool table, and snow melt system in the rear utility yard.

Additionally, the center has indirect air conditioning units that use large heat wheels to cool the servers, without bringing outside air into the room or using water to cool the facility. Uninterrupted power supply units are backed up by two 2.5 megawatt generators.

“We had a great opportunity and have customized the technology center,” says Linglong He, chief information officer of Quicken Loans. “Every single item is selected, engineered, and designed by our own technology team members. This building is state of the art, and a great addition to this growing area of Corktown.”

Quicken Loans plans to rent out 33,000-square-feet of the facility, which is unoccupied and includes one of the server rooms, to other local businesses.

While Corktown is widely known for its restaurants, several technology companies have located facilities in the neighborhood. In January, the American Lightweight Materials Manufacturing Innovation Institute opened up a $148 million, 100,000-square-foot facility in Corktown.