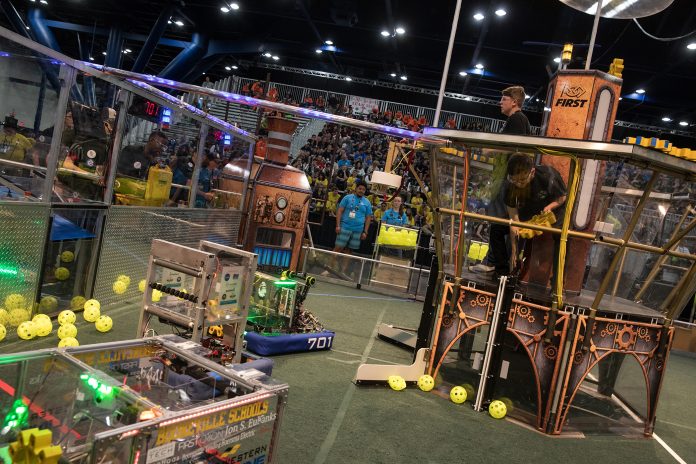 Quicken Loans Inc. in Detroit is a big part of the city’s student robotics events – it is a sponsor for this week’s FIRST Championship in Detroit and has announced it launched 20 FIRST teams in the Detroit Public Schools Community District (DPSCD).

The company launched the teams through a partnership with the Detroit Police Athletic League (PAL), a nonprofit organization that works with schools to create extracurricular activities. Quicken Loans created the teams in 14 middle and elementary schools. The teams will compete in the FIRST LEGO League and FIRST Tech Challenge tiers. They will participate in local competitions next month, and their season will officially kick off at the start of school in the fall.

As a sponsor for this week’s FIRST Championship (April 25-28), which is expected to draw more than 40,000 visitors to the city, Quicken Loans has expanded its initiative to train students in science, technology, engineering, and math (STEM). More than 15,000 students from 25 states and 45 countries are participating in the competition.

“Quicken Loans thrives on creativity, curiosity, and problem solving, which collectively spark the innovation that has grown and sustained our business,” says Laura Grannemann, vice president of strategic investments of the Quicken Loans Community Investment Fund. “We are thrilled about this FIRST partnership because it fosters those same values in a way that inspires fun and builds interest in future STEM career pathways for students.”

In turn, a section of the company’s STEM-themed Thanksgiving Day Parade float will be on display in Campus Martius until April 28. The float features a robot, a Snapchat geofilter, and is surrounded by displays showing STEM-related facts.

FIRST Championship is expected to generate $30 million in economic activity.

Quicken Loans has partnered with 50 schools to engage more than 7,500 Detroit students since 2016. In addition, team members have contributed more than 16,000 hours of mentorship.