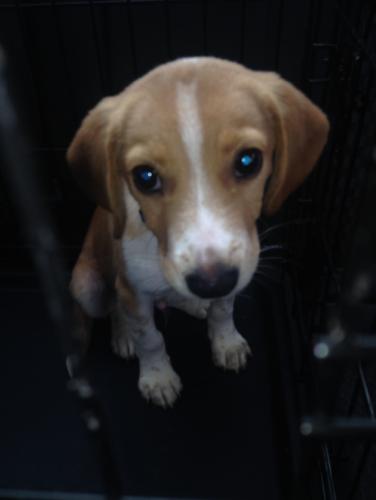 A 1-year-old basset hound-Chihuahua mix named Henry Wolfe is at the center of a dispute between the Grand Haven-based Worker’s Freedom Coalition and the NDT Materials testing facility, a division of TÜV Rheinland located in Caledonia, southeast of Grand Rapids.

The worker’s coalition, which submitted welded plates for an assessment test on Henry Wolfe’s behalf, says the dog is now certified to perform welding services on construction projects.

“It’s very shocking that we were able to get welding certifications for a dog, since obviously he didn’t actually weld the plates sent to NDT,” says Rev. C.J. Hawking, a member of the Worker’s Freedom Coalition. “I think that speaks volumes about the reliability and accuracy of NDT’s testing procedures. Dishonest contractors can easily abuse the system.”

While facilities accredited through the American Welding Society require that a third-party certified inspector be present when workers are welding their test plates as well as during the testing of the plates at the testing facility, some non-accredited facilities, such as NDT Materials, do not, Hawking says.

But Robert Nichol, a quality assurance manager for TÜV Rheinland, says the canine was never certified for anything. “We don’t certify welders. We perform the testing and we document their qualifications on something called a welder’s qualification test record. At that point, it’s up to the client (the manufacturer or contractor) to say, ‘Here is our certified welder.’”

In the case of Henry Wolfe, Nichol says the testing facility received fraudulent paperwork and information that included a false name and employee identification number. “The program relies on the integrity of the client, the manufacturer. The welding code specifies that they are responsible for certification,” he says.

“Based on the (new) information, we are submitting a revocation letter to our customer saying that Henry Wolfe the dog no longer meets the requirements to be qualified as a welder,” Nichol says.

The Worker’s Freedom Coalition challenged NDT’s self-test process as part of its ongoing campaign against Hudsonville-based Lamar Construction, which has certified some of its welders through NDT, according to the Worker’s Freedom Coalition. According to the WFC, Lamar has allegedly submitted fraudulent welding certification documents for some of its employees.