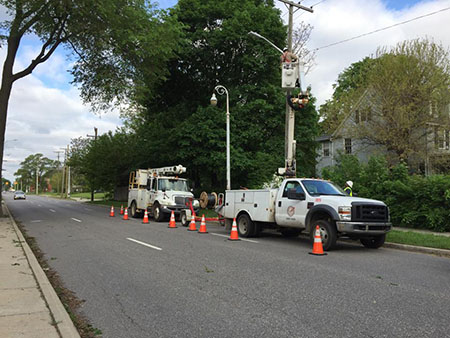 The Public Lighting Authority has started installing new streetlights on Jefferson Avenue, stretching from the border of Grosse Pointe Park to I-375 in downtown Detroit.

“With lights not working on Jefferson — one of the city’s busiest thoroughfares — for years, clearly we are on our way to reversing decades of disinvestment in the city’s street lights,” says Odis Jones, CEO of the Public Lighting Authority.

Jones says workers have begun setting the first of more than 450 new foundations for the steel poles that the lights will be attached to at the northwest corner of Alter Road and Jefferson Avenue. He says the new lights will be 400-watt equivalent LED lights.

Jones says about 18,000 additional new LED lights will be installed in the city during the next year and a half, eventually totaling 65,000 new street lights in Detroit.