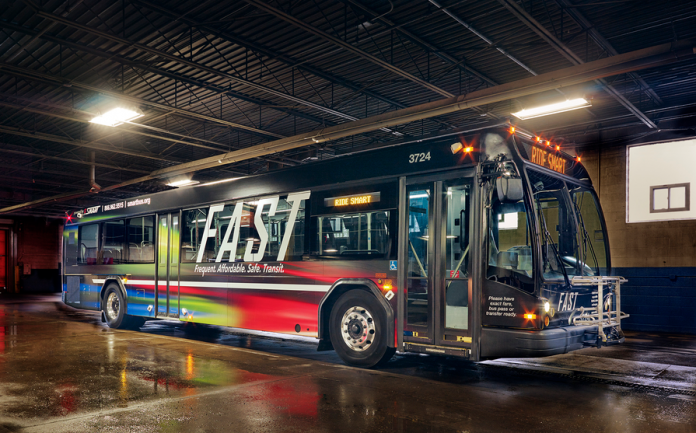 If metro Detroit can speak with one voice via a regional transit authority in submitting applications for federal transit funds, rather than from as many as 10 separate entities, it would stand to garner more grants and other investments needed to better move people, products, and cargo.

In March, Wayne County Executive Warren Evans, his economic development team, the Regional Transit Authority of Southeast Michigan (RTA), and others released a proposal for a 1.5-mill annual tax over 20 years to fund a regional transit plan. If approved in the coming weeks, the measure would be on the November ballot.

The plan, called Connect Southeast Michigan, would raise $5.4 billion over 20 years in Oakland, Wayne, Macomb, and Washtenaw counties. The average house in the region is worth $157,504, meaning it would cost $118 a year, or less than $10 a month.

In 2016, an RTA ballot initiative for a 1.2-mill tax was narrowly defeated because it was too rigid, failed to benefit some communities while neglecting local input, and didn’t take into account rapid changes in mobility, among other factors.

“Every year we wait in forming a single regional transit authority, the more expensive it becomes,” says Khalil Rahal, assistant Wayne County executive, during an interview on Friday. “Other regions like Seattle have taken a tough road to form a single regional transit authority. That means when they submit an annual transit request to the federal government, those federal officials are going to give them more support over a region like ours that submits as many as 10 separate applications.

“When federal officials looks at those applications, they say about a place like Seattle, ‘Wow, they have their stuff together.’ But for a region like ours, 10 separate applications is a lot more difficult to deal with. It’s clear regions with strong, well- supported regional transit authorities perform better. We’re leaving a lot of money on the table.”

The benefits of having a single regional transit authority — right now southeast Michigan has SMART, the Detroit Department of Transportation (DDOT), and smaller transit entities — is not only the ability to speak with one voice but the efficiency of planning transit needs with one organization.

Rahal says millions of dollars in savings could be realized via a single RTA, including reduced costs for “planning, procurement, administration, a single call center, one single brand, and one map,” he says. “We have 140 municipalities and we’re not speaking with one voice, and that is really hurting us. It’s better to work together than separately.

“Some people say, ‘Well we have SMART, they should do it.’ But SMART can’t do everything because they have very clearly defined regulations that restrict what they can do. It’s the same thing with DDOT and other transit organizations. Nearly every community right now is paying for transit, whether it’s helping seniors get to shopping destinations or a cultural event, or to help people get to a job. But when you operate all of these transit needs separately, you can’t take advantage of efficiencies when you operate in a macro way.”

By way of example, Rahal says one reason metro Detroit didn’t make the cut for landing Amazon’s second headquarters — and with it up to 50,000 jobs and $5 billion in new investment — was because there was no regional transit system that could efficiently move the influx of new workers to Amazon’s planned employment campus.

“There is not a region out there that has 50,000 workers ready to go for Amazon,” Rahal says. “Whatever region gets selected will have to bring in new workers.  Amazon is looking to get new people into a region and get their (overall) employees to work and take care of their other needs very efficiently. We lacked a regional transit operation that could draw those people here and take care of them in terms of their public transit needs.”

Following the defeat of the 2016 plan, Rahal says the RTA team and others looked at what went wrong and what could be improved. The first plan called for rigid, bus-only lanes along Woodward Michigan, and Gratiot avenues, among other roadways, that would cost as much as $10 million a mile to implement. The new plan is more flexible and reaches more places, and would cost up to $1.5 million a mile to design and operate.

“Where before we had dedicated bus lanes, now we have lanes that can be tapered at much less expense, plus there is (traffic) signal priority in some places, and there is more flexibility to bring in future technology,” Rahal says. “We’ve added more priority routes that will have 15-minute (pickup) intervals along Woodward, Michigan, Gratiot, Grand River and Mound/Van Dyke. Right now, some SMART routes have a one-hour (pickup).

“Plus our park-and-ride lots are at capacity, so there are plans to expand those, and each county would be provided better access to Detroit Metropolitan Airport (in Romulus via buses and an existing train line). It’s clear when you look at factors like an upcoming 140-percent increase in people who will be 65, and the fact that young people largely prefer mass transit so they can work more or use their smartphones more, that we need to do something.”

The plan also would provide for greater commuter rail offerings between Detroit and Ann Arbor.

While the proposed RTA plan faces some resistance from Oakland County Executive L. Brooks Patterson and Macomb County Executive Mark Hackel, as well as some outlying communities that would like the ability to opt out of the millage, Rahal says the plan should be placed on the ballot so that voters, not solely politicians, can decide the fate of the RTA.

In turn, the plan calls for a single rate structure, and it is projected to support 167,000 jobs, provide $6.6 billion in additional Gross Regional Product, and generate $4.5 billion in personal income if approved.

By statute, 85 percent of tax revenue raised under the plan will be invested in the county it was collected from. With federal and state contributions, investments in each county will exceed 105 percent of their tax contributions.

“We have the support of the business community, the Detroit Regional Chamber, and many others,” Rahal says. “Study after study has shown that for every $1 you spend on public transit you get back $4 in return based on efficiencies and other factors like lower traffic volumes, fewer accidents, increased safety, better access, less pollution, and lower insurance rates.

“Like I said, the more we wait and try to do another plan, the more expensive it will become. Wayne County Executive Evans has put forth a very viable plan with plenty of input from the community, and we feel the community should be able to vote on the measure.”

For more information, attend a public meeting, or take a survey, visit www.rtamichigan.org.