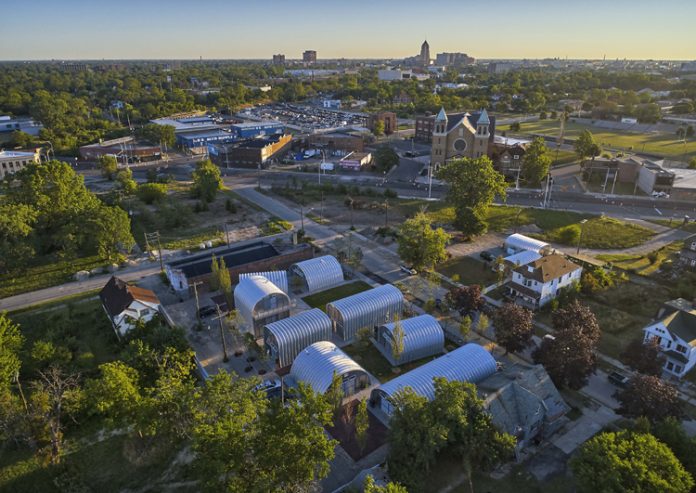 Prince Concepts, which owns the popular restaurant TAKOI and built the True North mixed-use project, both in Detroit, today released details about a new 50,000-square-foot development now underway at several neighboring sites near Grand River and Warren avenues, which is about two miles northwest of downtown Detroit.

The new developments are being located on various sites and encompass reuse and new construction to create rental housing, offices, and studios along with a coffee shop, a restaurant, a bar, and public outdoor spaces. Prince Concepts plans to increase the walkability and livability of the neighborhood, as well.

“We want energy. We want the neighborhood to respect the past, but also look to the future,” says Philip Kafka, founder of Prince Concepts. “We’re excited about the interesting neighborhood we’re a part of and look forward to developing more of it.”

The Sawtooth will be located at 4884 Grand River Ave. and will house commercial spaces, including Astro Coffee Roasting Facility, Lafayette American, and a commissary kitchen for Prince Concepts’ restaurants. Underdog Boxing and a jewelry company, already located in the building, will continue to operate there. The building is named for its second-floor windows that when open, look like a sawtooth.

Astro Coffee Roasting Facility/Ochre Bakery will expand from its Corktown headquarters to 3,500 square feet of space, providing the seven-year-old company with a dedicated bakery and coffee roasting facility. It will also have a retail presence that will be next to a forthcoming public park. Detroit and Brooklyn’s Et Al, an architecture firm, is leading the design, and it is expected to be completed in the coming weeks.

Lafayette American, an advertising agency launched in March, will have a new 2,200 square-foot loft office.

Prince Concepts is working with Undecorated, a New York City-based designer, and Et Al in Detroit to transform a former 12,000 square-foot, double height grocery store into ground-level retail and housing called 5K. The eight gallery-style apartments will use the existing roof and share a landscaped courtyard and winter garden.

The units will range from 500 to 1,200 square feet, and the front half of the building will have three commercial studio spaces for rent. The remaining 17,000 square feet of land, which will be between the building and the Grand Trunk Rail-line, will provide tenants with parking and landscaped gardens.

The Magnet will build on TAKOI, a restaurant in Corktown that Kafka opened in 2016 with Chef Brad Greenhill. Greenhill will be part of the 2,100-square-foot Magnet restaurant and bar, which will have a vegetable-centric menu. The designer is Undecorated, and the architect of record is White Lake Township’s BIGG Designs. The restaurant is named Magnet because it will operate from a former radiator shop.

The Caterpillar is envisioned as live-work rental units that will take inspiration from hotel living. Each tenant will have between 1,300 and 1,900 square feet of space and access to common spaces. Undecorated; New York’s Stamberg Aferiat and Associates, which is overseeing the overall exterior and interior design; and Studio Detroit are in the early design stages.

Among its accolades are winning Best Multi-Unit Residential Project of the Year by The Architect’s Newspaper and being identified as one of more than semi-finalists for the 2016/17 Mies Crown Hall Americas Prize, an award given to one project in North and South America every two years.