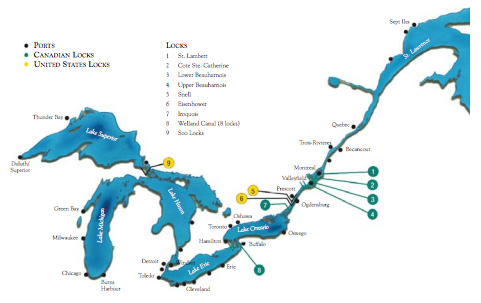 As the 2017 shipping season gets underway with this week’s opening of the Great Lakes-St. Lawrence Seaway system, the Chamber of Marine Commerce predicts a big improvement over 2016’s modest exports.

According to information from the Great Lakes Seaway Partnership, the annual economic output of the Great Lakes region is $5 trillion, and the industry represents 26,800 jobs tied to Michigan’s shipping industry. A 60 percent increase in shipping freight is expected over the next 30 years.

“Certainly there was a big improvement in the last quarter of 2016 with the resurgence of iron ore pellet exports out of the U.S., (along with) a strong grain season,” says Bruce Burrows, Chamber of Marine Commerce president. “We expect that positive momentum to continue with overall cargo volumes increasing this year.”

Burrows adds that the Chamber and its members are keeping an eye on key legislation that is currently being considered by the U.S. Congress, including the Commercial Vessel Incidental Discharge Act, which would replace multiple federal and state regulations with a single national standard for the regulation of ballast water and other discharges incidental to normal vessel operations.

“From a regulatory perspective, it’s crucial this shipping season that we start to see some progress towards cross-border harmony for ballast water regulations,” Burrows says. “We’re hoping the U.S. bill CVIDA will pass both the House and the Senate and create one set of robust regulations for U.S. waters that are overseen by the U.S. Coast Guard and that support the importance of interstate commerce approaches being protected at the national level.”

The Port of Detroit is among those with new projects on the horizon, including a water taxi project and improvements to the Rouge River channel.

“We are looking at an extended water taxi/ferry service this summer and expect to execute an agreement with the U.S. Army Corps of Engineers for a dredging project on the Rouge River to deepen the channel to 25 feet,” says John Loftus, executive director of the Port of Detroit. “We also anticipate the opening of a new general cargo terminal in Detroit.”

The Chamber of Marine Commerce is a bi-national association that represents more than 130 marine industry stakeholders, including major Canadian and American shippers, ports, terminals, and marine service providers, as well as foreign and domestic ship owners throughout the Great Lakes and St. Lawrence region.