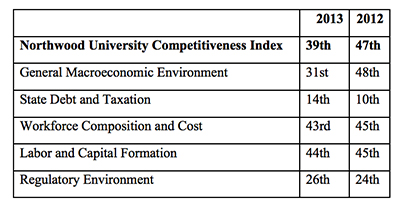 Michigan has upped its game in economic competitiveness, says a public policy study released Monday by Midland-based Northwood University on behalf of the Michigan Chamber Foundation. The state jumped from 47th  to 39th according to the second annual 2013 Michigan Economic Competitiveness Study.

The study — which analyzed more than 200 variables — found that Michigan was able to shed debt, while reducing business taxes and burdensome regulations. At the other end of the spectrum, the state struggled with Michigan’s energy costs, auto insurance rates, population migration, and entrepreneurial activity.

“Given Michigan’s entrepreneurial history and the pressure to start more businesses as we come out of the recession, we were hoping that would be a higher number,” says Thomas, noting that Michigan’s ranking was based on the Kauffman Index for Entrepreneurial Activity — which dropped to 180 in 2012, well below the national average of 304. “If a business didn’t survive, that contributed to that index factor. We’re also still not seeing enough new businesses start.”

However, a drop in ranking doesn’t necessarily mean a state is performing worse than before, Thomas says. “Last year, for example, we were 10th for debt and taxation, and this year we’re 14th. (It’s likely) nothing has changed with us for that particular factor, but that four other states moved faster than we did on new developments or changes to make them more competitive.”

While Thomas says Michigan has room to improve, to put things in perspective, the report clarifies that Michigan’s gross state product is “roughly equivalent to the (gross domestic product) of the country of Austria, which would make Michigan one of the 30 largest economies in the world if it were a country.”

On a regional level, in comparison to Wisconsin, Illinois, Indiana, and Ohio, Michigan led the pack for GSP growth rates. Likewise, of the seven largest cities in the region, Detroit and Grand Rapids are two of the fastest growing cities.  “Even though Detroit has had some trouble, its growth — such as the new businesses we’re seeing in Midtown — shows how fast things are moving,” Thomas says.