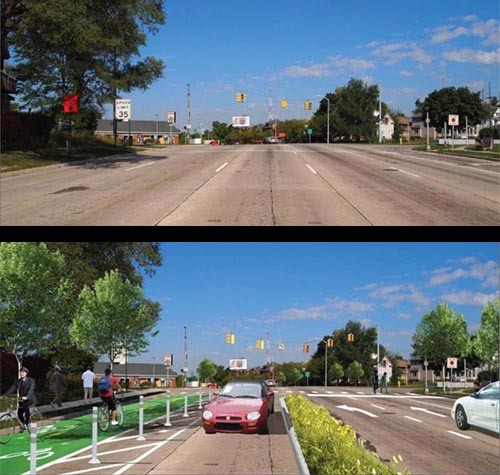 A traffic assessment, calling for several changes to Pontiac’s Woodward Loop — including enhanced bicycle and pedestrian facilities — will be included in an updated version of the city’s master plan. The assessment received unanimous support this week from the Pontiac City Council.

“(The Woodward Loop) was planned in the early 1960s when the auto industry was booming and projected traffic volumes were up in the 155,000-car-a-day range,” says Bret Rasegan, planning supervisor of the Oakland County Economic and Community Affairs Department. “But that traffic never materialized. The road was essentially over-planned and overdesigned for the capacity needs.”

To better accommodate the thoroughfare’s actual traffic — up to 30,000 cars a day — the city of Pontiac and Oakland County joined forces to create a transportation assessment, with recommendations aimed at “breaking down the barrier between the central business district and neighborhoods … making it easier for people to get downtown to shop, eat, and drink,” Rasegan says.

Besides improving bicycle and pedestrian conveniences and converting all one-way streets to two-way, the western leg of the loop would be modified to serve as the higher traffic volume loop with a four- to five-lane cross section. Additionally, the eastern leg would be a two- to three-lane cross section with on street parking.

The plan also calls for the establishment of a coalition of city, county, and business representatives to insure the Woodward Loop project keeps moving forward. Once the recommendations are adopted in Pontiac’s official policy, Rasegan says he can start working with the region and state to get the changes incorporated into broader transportation plans.

“The challenge with any road project at this time (is that) the Michigan Department of Transportation is very stretched for funding,” he says, noting that he will likely look into alternative grant opportunities as well.