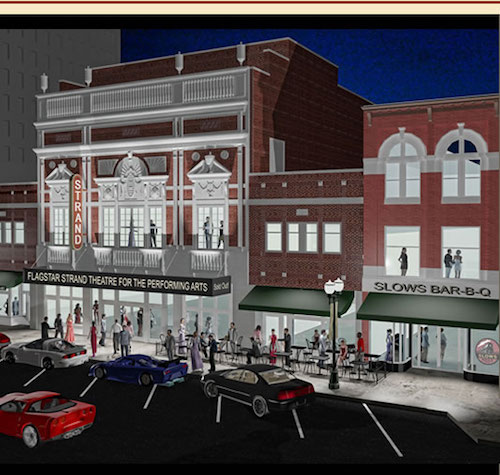 Prior to its expected January opening, the Flagstar Strand Theatre for the Performing Arts, a $20 million renovated performance space in downtown Pontiac, will host a Sneak Preview Benefit on Dec. 15.

A strolling dinner, available to Gold Circle Pre-Glow ticket holders, will be catered by Lafayette Market and feature such items as beef carpaccio roulade on brioche, shrimp forks, a composed salad station, soup shooters with petite sandwiches, small-plated bulgogi marinated hanger steak, a dessert station with a fresh fruit display and holiday chocolate bark, and more. A cash bar also will be available.

“This benefit is another step toward the rejuvenation of downtown Pontiac, and will allow us to engage the local community with live performing arts education and experiences,” says Bill Lee, president and CEO of the Flagstar Strand Theatre. “Our Dec. 15 guests will (be) the first to enjoy the newly renovated Flagstar Strand Theatre.”

Tickets for the event, which range from $50 to $200, are on sale on the theater’s website. Proceeds will benefit Encore Performing Arts Center, a nonprofit organization that will manage the theater.

Renovations of the space, which will feature 900 luxury seats and state-of-the-art acoustics, will be completed early next month.

Adjoining the Flagstar Strand Theatre, 12 N. Saginaw St., will be the first and only Oakland County location for Slows Bar-BQ, which is set to open next year. The 110-seat restaurant, to operate on the ground floor of the theater seven days a week, will feature a menu with barbecue-style fare.

Slows will also offer select dishes, along with craft beer, wine, and cocktails inside Flagstar Strand’s Charlene’s Theater bar and throughout the theater’s other lounges, bars, and VIP areas.