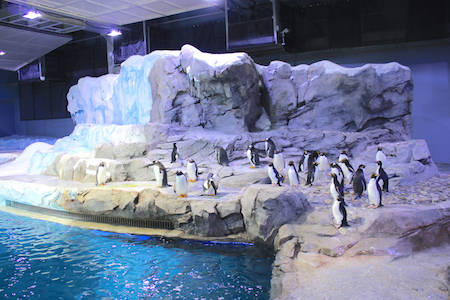 One year after moving and adding penguins at the Detroit Zoo into their new home at the 33,000-square-foot Polk Penguin Conservation Center, attendance has increased to 1,698,053 visitors, a 200,000-person increase from the previous year.

The Detroit Zoological Society’s (DZS) Center for Animal Welfare (CZAW) have been monitoring the penguins since Nov. 2014 as part of an extensive, long-term welfare research project comparing their behavior in their former home to the new facility.

“Through the Center for Zoo Animal Welfare, we conduct extensive research to better understand and advance the well-being of all animals living in the care of humans,” says Ron Kagan, executive director and CEO of DZS. “Whenever we design a new habitat, we aim to provide an environment that allows the animals to thrive.”

The penguin center was designed to mimic the species’ wild home in and near Antarctica. It offers a dramatically increased space, including a 326,000-gallon, 25-foot-deep, chilled aquatic area that incorporates waves, rocky terrain, and falling snow for the penguins to explore. Research shows that the king penguins, in particular, have increased their use of water 10-fold since moving into the new facility.

“The new habitat has 10 times the amount of water available to the penguins. This is solid evidence that having additional space translates into an increase in species-typical behaviors, and that it has nothing to do with the need to find food or other resources. They simply like to swim and dive,” Kagan says.

“This type of long-term study is an incredible opportunity for us to examine a variety of factors that affect the well-being of the Zoo’s individual penguins, and to contribute to the body of knowledge on penguin behavior.”

The penguin center includes a 34-foot-wide acrylic window and two acrylic tunnels, and also provides guests with interactive educational tools about Arctic explorers, modern-day researchers, and the ecosystems of this region. It is believed to be the largest penguin conservation center in the world.

CZAW will also host its fourth International Animal Welfare Symposium from May 4-6, in partnership with the World Association of Zoos and Aquariums. More information can be found here.