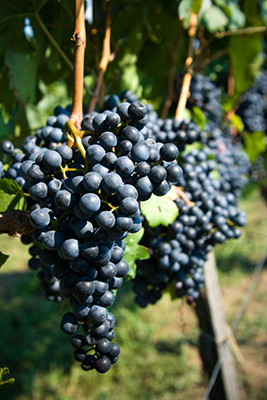 Michigan vintners, who expect a smaller-than-average crop from this year’s harvest, are still feeling the effects of the extended, extreme cold from last winter, including the dreaded “Polar Vortex.” Overall, grape and grape juice products generate nearly $790 million in total economic value in the state.

“We anticipate an approximately 50 percent reduction in the size of the state wine grape crop compared to the record 7,600 tons reported in 2013,” says Gordon Wenk, chairman of the Michigan Grape and Wine Industry Council in Lansing.

Severe cold from January through March, the coldest in Michigan since 1993-’94, resulted in damage to grapevines that reduced fruitfulness for many of the more cold-tender varieties used for wine production in Michigan.

More than 40 varieties of grapes are used for wine production in Michigan, and some varieties like Merlot, Chardonnay, Pinot Noir, and Cabernet Franc are more susceptible to damage from prolonged cold temperatures. To help mitigate some of their losses, growers are preparing applications for USDA federal disaster assistance programs, Wenk says.

The cool, wet summer also delayed ripening of this year’s crop. “This season was one of the coolest and wettest in the recent past, and this made management of diseases and insect pests very challenging for some growers,” says Keith Mason, a member of the Department of Entomology at the Michigan State University Extension.

While consumers may face a reduced selection of styles and labels from Michigan’s 2014 vintage, wine inventories are in good shape at most wineries as a result of highly productive vintages in 2012 and 2013.

In contrast, Michigan’s apple growers will harvest approximately 28.7 million bushels of apples this year — one of the largest apple crops the state has ever experienced — according to a recent report from the USApple Outlook.

“Many factors have contributed to this large crop,” says Diane Smith, executive director of the Michigan Apple Committee in Lansing. “Great weather this past spring and summer, including cool nights, along with plenty of rain as well as a good amount of sunshine certainly helped. Of course, the hard work of our apple industry always plays an important role.”

What’s more, annual apple production — with 9.2 million apple trees, Michigan is the nation’s third largest apple producing state — will likely increase, as long as the weather cooperates. “With high-density plantings (approximately 1,000 trees per acre) and advancements in technology, Michigan is going to continue to produce a larger quantity of apples. We are also seeing great quality and size,” Smith says.