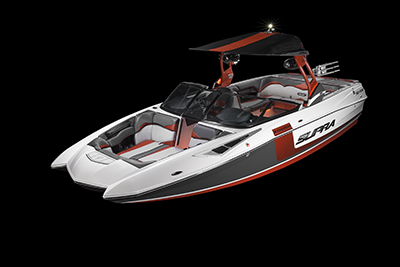 What Ford Motor Co. did for the Mustang, Roush Performance in Plymouth Township hopes to duplicate with its first-ever boat inspired by the muscle car’s performance and reputation. The wake boat with more than 500 horsepower was unveiled this week at the SEMA Show in Las Vegas.

“Along with the powerful Roush charged Raptor by Indmar (engine) to give watersports enthusiasts an extra kick, we added refined touches to the interior and exterior to make the Supra SE 550 Roush Edition a unique owner’s experience,” says Gary Jurick, president of Roush Performance, a designer and manufacturer of aftermarket performance parts.â€‹

Jurick says the speed boat is designed similarly to a Ford Mustang, with custom metallic colors on the tower and a two-tone hull gel coat. The boat has a 16-valve, V8 engine, which increases wake size and stability. He says the boat’s launch system reduces drag in the water and increases acceleration.

“The 2016 Roush edition takes everything our customers love about Supra and supercharges it,” says Rick Tinker, president of Skier’s Choice, the manufacturer of Supra performance inboard wakeboard and waterski towboats. “It brings together the automotive heritage of Roush Performance and the precision engineering of Supra Boats.”

The Supra SE 550 Roush Edition will be available in limited quantities this month through Supra’s dealer network.

In July, Roush Performance unveiled an exhaust control for Ford Mustangs that allows users to change the vehicle’s sound through an iPhone app.