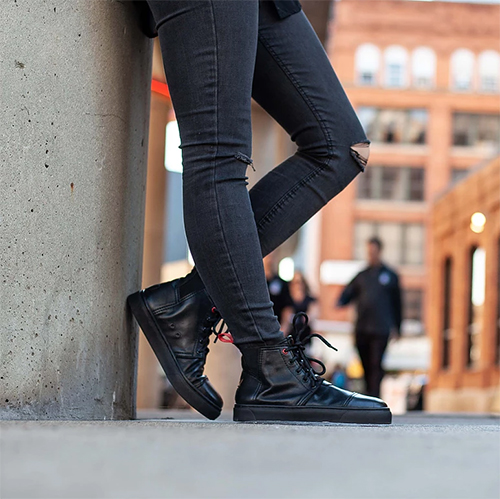 Pingree Detroit, a leather footwear and accessories company, has rolled out what is believed to be the first locally crafted sneaker, called The Mayor. An urban utility boot called The Governor will be introduced early next year, joining the company’s current line of leather tote bags, wallets, backpacks, clutch purses, and apparel items.

The launch edition of The Mayor leather sneakers has sold out, while brown or black versions of the shoes can be ordered for delivery in January. The handmade, hi-top sneakers, which retail for $298, are available in black or brown leather.

The majority of the leather is sourced from Lear Corp. in Southfield, one of the largest automotive seat suppliers in the world. Most of the leather, known as reclaimed or upcycled leather from seats and steering wheels, is donated or provided at a cost that Pingree Detroit otherwise couldn’t afford.

The company, launched in 2015 and now located in the Milwaukee Junction neighborhood southeast of New Center, hires U.S. veterans to produce the sneakers. It takes between 10 and 12 hours to produce one sneaker, and the veterans are trained by Cinthia Montaque, a boot maker and adjunct professor at the College for Creative Studies in Detroit.

“I was working for a youth-based nonprofit organization in 2014, and I met two veterans who couldn’t find work, so I hired one of them to visit veteran shelters to find out what the job needs were,” says Jarret A. Schlaff, co-founder of Pingree Detroit. “One of the job needs was hand-crafted products, and that’s how he got things going with the help of two private investors and a crowd fundraising campaign.”

The company and shoe lines are named after Hazen S. Pingree, a veteran who arrived in Detroit following the end of the Civil War. A shoemaker by trade, Pingree was Mayor of Detroit from 1889 to 1897 and Michigan’s governor from 1897 to 1901.

Pingree is best known for breaking up electrical, natural gas, and railway monopolies during his time as mayor, as well as allowing citizens to farm public land during the economic panic of 1893. As a result, he earned the nickname of “Potato Patch Pingree.”

During his time as mayor, he was elected as Michigan’s 24th governor. He tried to hold both positions, but the Michigan Supreme Court ruled he had to resign his position as mayor. A statue of Pingree was paid for by a citizen’s movement, and it now stands at the southwest corner of Woodward Avenue and Adams Street in Grand Circus Park. On the back of the statue commemorates Pingree as “The Idol of the People.”