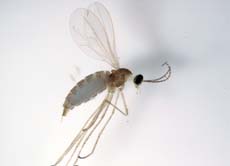 A potentially serious threat to Michigan’s cabbage, broccoli, cauliflower, and other crucifers has been found in the state for the first time at five organic farms in Sanilac County in the Thumb.

“This is not a food safety issue,” says Jennifer Holden, spokeswoman for the Michigan Department of Agriculture and Rural Development. “What (Swede midge) does is it lays its eggs on the stalks of the vegetables then the larvae emerge from the egg and feed on the stalks and the tops of the vegetables. Then it kills the growing tips of the plants and leaves the plants open to secondary bacterial infections.”

Holden says the Swede midge, which is about two millimeters long, is native to Europe and southwest Asia. It was first identified in North America in 2000 in Canada. The first U.S. detection was in New York in 2004, and since then it has spread to at least seven states and six Canadian provinces.

She says at this point, it’s not known how Swede midge was introduced into Michigan. Holden says Michigan State University is trying to determine how many farms have been infected.

“We will be working with (Michigan State) to determine the extent of the infestation, developing, monitoring, and (offering) recommendations and then educating our farmers and growers on what they can do to protect our crop,” Holden says.

She says farmers can use an insecticide application and rotate to a non-crucifer crop every two to three years to avoid infestation.â€‹