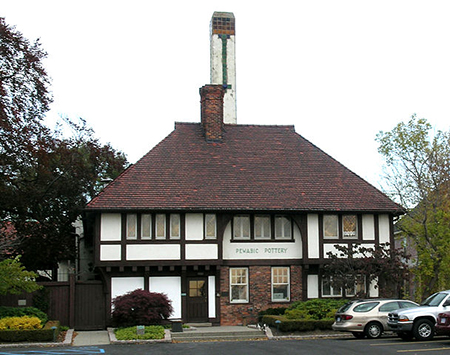 A film crew from the PBS series Craft in America will visit Pewabic in Detroit this week for a three-day shoot following the creation of the studio’s Snowdrop vase and The Twelve Days of Christmas collectible ornament.

The resulting footage will be used in a holiday-themed episode that will air on PBS in December 2015, says Christina Devlin, interim chief administrative officer at the ceramic studio and school, founded by Mary Chase Perry Stratton in 1903.

“They’re going to be following both items through production, from start to finish,” Devlin says. “If we were really starting the process from the beginning, it would take about two weeks from pressing or casting the piece all the way through the final firing.”

To save time, the Pewabic staff will prepare each stage ahead of time, allowing the crew to finish filming the entire production process by Wednesday.

The crew will also highlight historic Pewabic installations at sites including the Detroit Public Library, Detroit Institute of Arts, and the Guardian Building as well as architectural tile installed on the façade of the Detroit Tiger’s Comerica Park and the contemporary murals at several People Mover stations.

“We at Craft in America have desired to include Pewabic in our PBS series since we first began to imagine our program in 2001,” says Carol Sauvion, executive producer/director for Craft in America. “We are thrilled to finally be filming at Pewabic and look forward to telling this ever vital American craft story with an emphasis on the holiday traditions at Pewabic.”

The Peabody Award-winning documentary, now in its seventh season, will also visit with former Pewabic employee and artisan Nawal Motawi, who runs Motawi Tileworks in Ann Arbor. She will talk about her new polychrome tile. “Part of our goal is to make ceramics relevant and accessible to everybody, so we love it when people come in, learn this craft, and then take it out into the world and make it their own,” Devlin says.

In other news, in addition to “filling web orders like mad,” the studio is preparing to launch its 2015 Contemporary Ceramic Exhibition, which opens Jan. 23.

Pewabic — which employs more than 40 people, not including contract teachers who take the center’s programming into underserved areas — will continue its partnership with Major League Baseball, with products available at the Tigers Den store next season. It is also exploring new opportunities with both General Motors Co. and the Cranbrook Educational Community in Bloomfield Hills, and is working on a new collection with guest designer Marie T. Hermann, a 2013 Visual Arts Fellow through the Kresge Arts in Detroit program.