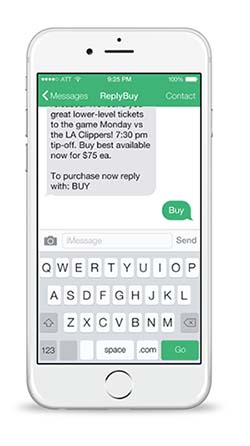 Palace Sports & Entertainment, which operates venues including The Palace of Auburn Hills, DTE Energy Music Theatre, and Meadow Brook Music Festival, has announced a partnership with ReplyBuy, a program that allows for instant mobile ticket purchases.

“One of the challenges we have with our concerts is letting fans know when tickets still remain for popular artists as the assumption is that they are sold out,” says Mike Donnay, vice president of brand networks for Palace Sports & Entertainment. “Using ReplyBuy, we will be able to send a quick notification directly to fans’ phones and deliver the ticket immediately by simply replying back to the message.”

ReplyBuy sends a text message once ticketing opportunities are available. Customers can then send a text message back that says “Buy” and then they will be sent a link to the tickets. Fans can either print out the tickets or have them scanned directly from their smartphone.

Donnay says Palace of Auburn Hills used the technology during this year’s Detroit Pistons’ season, and saw 5,000 customers use the platform. He says the Pistons’ were the first NBA team to use the platform.â€‹