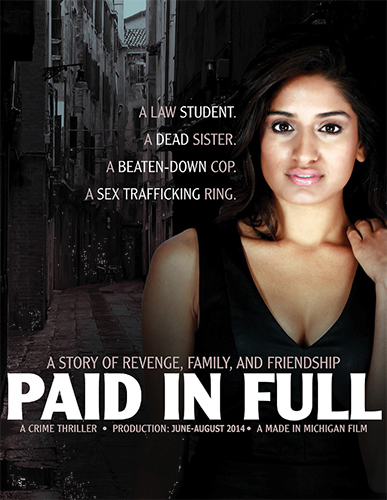 When filming kicks off this summer for Paid in Full, a crime thriller that centers on sex trafficking, don’t expect the cast and crew to shoot in a run-down setting. Technology expert and producer Nipa Shah is looking for authenticity, so the suburbs will do just fine.

“Most people think of sex trafficking as something that happens in other countries to runaway girls or sex addicts, but it can happen right here, in an affluent neighborhood in an affluent family to a girl who has everything,” says Shah, founder and president of Jenesys Group, a Novi-based online marketing firm, and editor of Michigan Be Healthy magazine. “I’m trying to see if I can shoot in the Novi and surrounding areas.”

The feature film — directed by Lance Kawas and written by Marc Prey — follows a law student seeking revenge for the death of her 16-year-old sister. In the process, she winds up uncovering a sex trafficking ring.

The story is set around and will be intentionally released just before the 2015 Super Bowl. “The Super Bowl is the single largest human trafficking event in the United States … I’m very passionate about women’s causes and wanted to make a socially relevant film,” Shah says.

The movie will also launch the acting career of her daughter, Nikki Shah, who plays the lead heroine. The male lead will be announced after his contract has been finalized, Shah says.

Shah, a native of India and a former executive at General Motors, expects the film to create 50 to 60 local jobs over its six-month production, which includes 15 days of filming and four months of post-production. “I’ve lived in Michigan for 29 years. I’m also a local businesswoman, so I’m always looking to contribute more to my city and my state. Going anywhere else was never an option.”

Currently in the pre-production stage, Shah says she plans to hire two or three other experienced actors from Hollywood for the film.