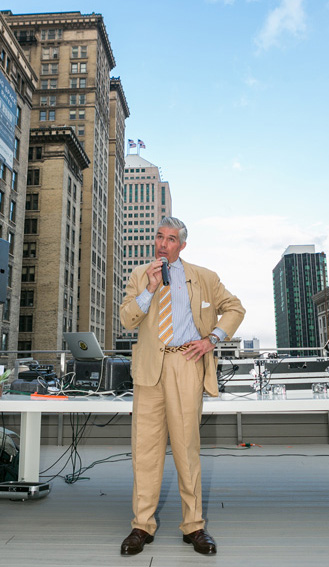 If the former Packard Motor Car Co. plant on Detroit’s east side is transformed into a mixed-use development of residential and office lofts, retail offerings, light industrial uses, or nonprofit activities, art will lead the way, says Fernando Palazuelo, principal of Arte Express in Peru, who acquired the historic manufacturing complex last year.

In an address before the Founders Junior Council, a young professional group of the Detroit Institute of Arts, which held its annual meeting and summer social Wednesday night at Rossetti, an architectural firm located in the Federal Reserve building in downtown Detroit, Palazuelo says art is the only force that appeals and inspires people, no matter their race or nationality.

Following a wide-ranging career that included active duty in the Foreign Legion and selling aircraft, Palazuelo says he started renovating abandoned, yet historic properties in Spain so that artists could be close to his gallery. “It wasn’t that I set out to renovate the buildings, it was more about art as the driving force to bring people together,” he says. “I followed the same model in Lima (Peru), and that’s what I see in Detroit.”

At times candid, yet forthright, Palazuelo says he discovered a new appreciation for the arts and business during the 2008 global financial crisis, when his various enterprises floundered and eventually were forced into bankruptcy. At the time, he and his wife and their four children were living in “a 200,000-square-foot palace” with a garage full of Ferraris.

After selling off everything to meet his debt obligations, Palazuelo and his family sought out opportunities in Lima, the capital of Peru. The developer says the country of 30 million people has been fairly recession resistant in recent years due to a mixture of economic markets that include agriculture, mining, fishing, manufacturing, and a thriving artist community.

When he arrived in Lima in 2008, he asked the taxi driver to take him to the most historic area of Lima, which like Detroit at the time, was floundering. Similar to the Motor City over the last six decades, most of the wealth in greater Peru was concentrated in the suburbs. “It was as if I came to Detroit and asked a taxi driver to take me to the Packard plant, which would not be recommended,” Palazuelo says of his arrival in Lima.

After connecting with a security guard at one of the abandoned buildings, Palazuelo contacted the owners and convinced them, or rather “seduced” them, into staking a redevelopment effort that included loft apartments, offices, ground-floor merchants, and other uses. “Eventually we did 22 buildings, and downtown Lima is thriving,” he says.

For the Packard plant, which encompasses 40 acres near I-94 and Mt. Elliott, Palazuelo says he has no illusions of saving Detroit. “I saw an opportunity to create something special from a plot of land that all but launched the creation of the middle class and a transformation of the global economy,” he says. “That is what inspires me.”

Since acquiring the abandoned complex that dates to 1903 and produced thousands of Packard cars as well as aircraft engines and other military components during World War II — at its peak the manufacturing campus encompassed 3.5 million square feet of space in more than a dozen buildings — he has met and been approached by “dozens” of developers, investors, and prospective tenants. He hopes to announce his plans for the site in the coming weeks, “so that we can contribute to the rebirth of Detroit,” he says. “This is the most exciting city in America, and I think it will thrive again one day. It’s already on its way.”

For more information about the Founders Junior Council, which is celebrating its 50th anniversary and has contributed hundred of thousands of dollars to help support the DIA, visit foundersjuniorcouncil.org.

In related news, the Founders Junior Council will host it annual Fash Bash at the DIA on Aug. 14. Tickets will go on sale in early July.