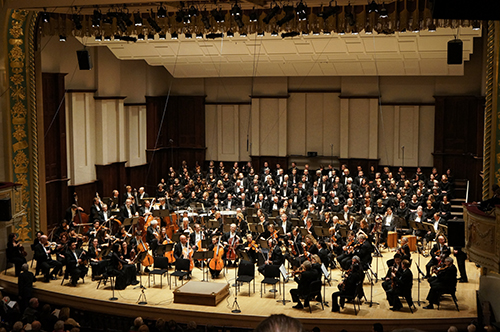 Oscar-winning composer John Williams and Academy Award winner Steven Spielberg will appear with the Detroit Symphony Orchestra on June 14, for a gala benefit concert at Orchestra Hall, it was announced today.

“The Detroit Symphony is one of our country’s great artistic treasures, and it’s always a privilege and a joy to make music with them,” Williams, who last conducted the DSO in April 2008, said in a statement.

During the event, Williams, who has won five Academy Awards, four Golden Globe Awards, and 21 Grammy Awards, will conduct selections from Star Wars, Harry Potter, Jaws, E.T., Indiana Jones, and Schindler’s List. Spielberg, who won Oscars for directing Schindler’s List and Saving Private Ryan, will join Williams to host the second half of the evening, with selected film clips projected on a giant screen above the orchestra.

Gabrielle Poshadlo, spokeswoman for the DSO, says the orchestra’s music director, Leonard Slatkin, “is an old friend of John Williams.”

“It’s definitely a big deal,” Poshadlo says. “Everyone knows who John Williams is. It (will be) a very relatable concert.”

She adds the DSO has held distinctive benefit concerts before, including a fundraiser with Kid Rock in 2012, which raised $1 million for the orchestra.

“We are collectively and individually indebted to (Williams and Spielberg) for their ongoing creative contributions and we look forward to celebrating their extraordinary collaboration at this very special evening with the DSO,” Anne Parsons, DSO president and CEO, said in a statement.