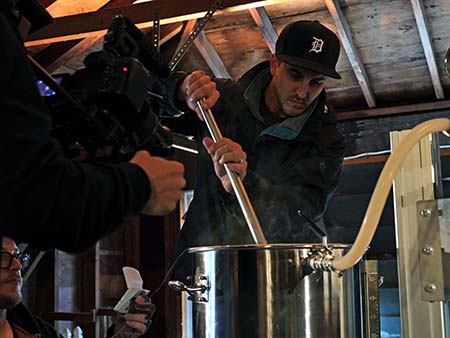 Urbanrest Brewing Co., a microbrewery that focuses on organic Belgian-style beer and kombucha (a fermented Chinese tea known for its probiotic health benefits), plans to open next spring in Ferndale.

“We felt that there wasn’t a spot in Ferndale that had good organic options, (nor was there) a high-quality brewery that’s putting (out) food and beer on the level that it needs to be,” says Zach Typinski, co-founder and president of Urbanrest Brewing.

Typinski says the brewery — named after a community in Ferndale historically referred to as “Urbanrest” — will be located in a former 5,000 square foot paint filter manufacturing facility at 2615 Wolcott Ave., near Hilton Road and Woodward Heights Boulevard.

About 3,000 square feet of the space will be dedicated to a 100-seat taproom that will be accented with natural lighting, exposed brick, and reclaimed industrial materials.

The menu will feature eight to 10 seasonal organic beers on tap, including a gluten free option, Belgian-styles like Saison, and American brews such as IPA; along with various cider, mead, and kombucha options that will range in price from $5 to $7. Six to eight rotating food items ranging from $8 to $10, such as charcuterie boards, soups, salads, pickled and fermented foods, and vegetarian options, will also be available.

“Being organic focused, as well as Belgian focused, it’s kind of a niche,” Typinski says. “We’re not necessarily going to have a product to distribute that’s on the shelf, so people will be forced to come to our taproom and taste our product at peak freshness.”

Ingredients will be sourced from organic suppliers, purveyors, and Urbanrest’s half-acre farm in Center Line where the company grows organic hops, herbs, and vegetables.

The brewery also plans to compost food scraps and waste, invest in solar energy as part of its hot-water collection system, and donate portions of their profits to local charitable organizations.

“We want a sustainable business, we want to produce a sustainable product, and we think the organic movement is the way that the industry should move,” Typinski says. “We want to remain very grounded in our local community and build from there as the demand for our product increases.”

Urbanrest Brewing is raising funds for additional renovation costs with a Kickstarter campaign, which runs until Aug. 19.