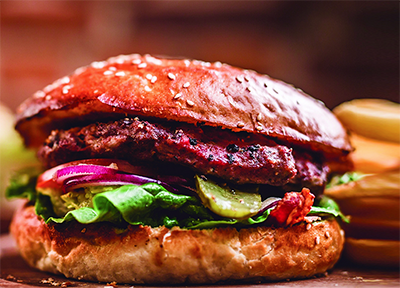 A fast-casual restaurant called Brome Burgers & Shakes that will feature organic and grass-fed beef burgers will open in downtown Dearborn next month.

“When I was living out on the West Coast, I just felt like there was nothing (in metro Detroit) that promoted the outdoor feel and just an organic environment with more sustainable practices, (like using) reusable utensils instead of plastic wear,” says Dearborn-native Sam Abbas, owner of Brome Burgers & Shakes.

“I know burgers may not be the healthiest option but there’s definitely a healthier way of approaching it,” Abbas says. “(Regular burgers) just kind of weigh you down, but when you actually eat the organic burger you don’t feel that at all.”

Prices range from $9 for an all-natural Angus burger, $9 to $11 for a salad with ingredients such as kale or quinoa, and about $4 for a shake.

He says the newly renovated space will feature floor to ceiling windows, white subway tile, and sunlights. There will be an organic living wall that spans 35 feet and is self-fertilizing and draining. The tables are made with wood from Reclaim Detroit, which derives materials from Detroit’s vacant structures.

“We kept a really rustic feel on the inside of the restaurant — a rustic, clean, fine line feel,” Abbas says.