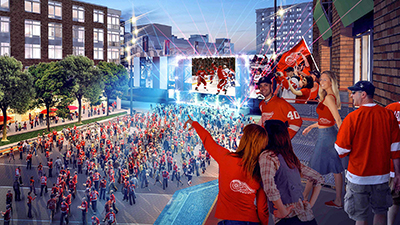 Olympia Entertainment today announced enhancements to the Detroit Events Center currently under construction, including the addition of an outdoor plaza with a video wall and an on-site practice ice for amateur hockey. The venue will be home to the Detroit Red Wings and offer an array of entertainment offerings.

“These enhancements will ensure we create a unique multi-use venue that brings the best in sports and entertainment to Detroit, while creating a destination for everyone in our community to enjoy,” says Tom Wilson, president and CEO of Detroit-based Olympia Entertainment. “With this additional $95 million in privately funded enhancements, we know that we will deliver a world-class venue that our community will be proud of.”

Wilson says additions include enhanced video and sound capabilities, a “skin” on the outside of the arena bowl that can display video and graphics, additional elevators, and improved seating options, including “gondola seating” that seems to be suspended over the ice or entertainment surface. He says Olympia Entertainment will add more green spaces across the arena site for regularly programmed music and entertainment. Operational improvements include additional points of sale and improved security systems.

Wilson says mass excavation and deep foundations are complete on the site of the new Detroit arena, and the erection of structural steel for the arena has begun.

When complete in summer 2017, the new arena will be home to the Detroit Red Wings, other sports and entertainment events, concerts, family shows and community functions.

To learn more about the Detroit Events Center, read DBusiness’ article on the district in the September/October issue by clicking here.