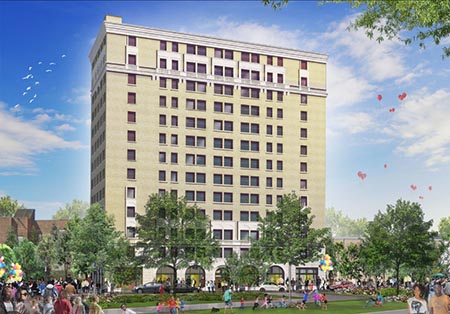 Detroit-based Olympia Development has announced plans to renovate the Eddystone Hotel in downtown Detroit into about 100 apartments, with 20 percent of those being affordable-housing units. The 13-story hotel opened in 1924.

Architect Louis Kamper designed the hotel, 110 Sproat St. at Park Avenue in an area at the northwest corner of Woodward and I-75. His portfolio includes the Book-Cadillac Hotel, Broderick Tower, and Park Avenue Hotel.

The Eddystone renovation is expected to start in the fall and will feature first-floor retail space when completed.

The hotel renovation marks one part of Olympia Development’s plan to build The District Detroit area, which will include The Detroit Events Center, which is a new arena for the Detroit Red Wings along with concerts, conferences, and special events. Work on the arena is scheduled to begin this spring, and should be completed by fall 2017.

The first four contracts for work on the events center were announced, as well. Detroit-based Blaze Contracting Inc. entered into a joint venture with Warren-based Angelo Iafrate Construction Co. to form Blaze-Iafrate JV LLC, which is being recommended as lead contractor. Of these initial contracts, $25 million of the $30 million total will go to Detroit businesses.

IN RELATED NEWS, Detroit’s Downtown Development Authority voted Wednesday to approve development plans for the Metropolitan Building, a 15-story commercial structure located directly behind the Jon Varvatos store at Woodward and John R. The building, to be redeveloped by Metropolitan Development Partners, will offer 71 apartment as well as ground floor retail space.

The neo-gothic building, which opened in 1925, has remained vacant for more than 30 years, and has long been considered an eyesore in Detroit.