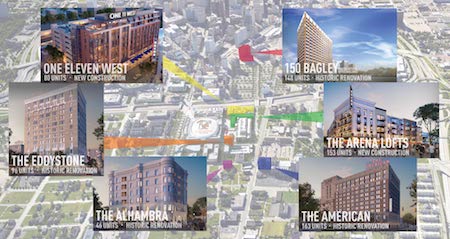 Olympia Development in Detroit, along with several development partners, today announced $160 million in new and renovated housing and retail projects in downtown Detroit and Midtown. Four buildings will be renovated, while two new projects will be built next to Little Caesars Arena, the 20,000-seat venue that will be home to the Detroit Red Wings and Detroit Pistons when it opens in September.

The new projects, located in The District Detroit, the 50-block area around the new arena under construction at Woodward Avenue and Henry Street, include Arena Lofts (120 Henry St.), which will be five stories high, offer 145 residences made up of studio, one-bedroom, and two-bedroom units, a rooftop deck, and ground-floor retail. Construction is expected to start this year, and take 18 months to two years to complete.

Across Henry Street will be One 11 West (111 Henry St.), which will offer 80 residences made up of one- and two-bedroom units, along with floor-to-ceiling glass, smart technology, adjoining parking, and ground-floor retail space. Construction is projected to start by the end of the year. Both projects will be developed by American Community Developers Inc. in Detroit.

“The District Detroit will be one of the most exciting places in the country to live,” says Christopher Ilitch, president and CEO of Ilitch Holdings Inc., which owns Olympia Development, Detroit Red Wings, Detroit Tigers, Little Caesars Pizza, and several other entities. “These six uniquely Detroit residential developments will be in the heart of the action, in a city on the rise.”

The renovated buildings include the former United Artists Theatre at 150 Bagley St., which was designed by famed architect C. Howard Crane in the 1920s. Once renovated by Bagley Development Group in Detroit, the building will offer 148 residences, a ground-floor restaurant and coffee shop, with construction projected to start by the end of the year.

“It’s a great building, and we are looking at what we could do with the former theater there, but we don’t have any plans for it yet,” says Emmett Moten Jr., a principal with seven other individuals in Bagley Development Group.

American Community Developers will undertake the redevelopment of three other buildings, including The Eddystone, a 130-story structure at 110 Sproat St. that was designed by famed architect Louis Kamper in the early 1920s. The project, to start construction next year, will offer 96 studio, one-, and two-bedroom units, along with ground floor retail.

It will be joined by The American at Cass Avenue and Temple Street, an 11-story structure at 408 Temple that is located immediately east of the Masonic Temple. The building will offer 163 residences made up of studio, one-, and two-bedroom units along with ground floor retail. The project will get underway next year.

Across Cass from The American will be the redevelopment of the Alhambra, a six-story structure built in 1899 (100 Temple). The building will offer 46 studio, one-, and two-bedroom units along with retail offerings. It was built in 1895 as the Alhambra Apartments.

In total, the project will offer 686 apartments, 139 of which will be affordable units.

“This development is one of the largest residential housing projects that the city has seen in decades,” says George W. Jackson Jr., a principal with Ventra Group in Detroit, which is serving as a consultant on the overall redevelopment. “There is a tremendous amount of interest in housing in Detroit.”