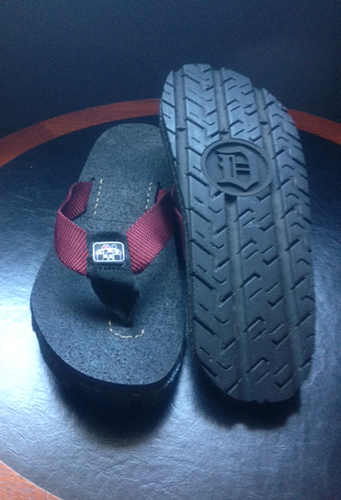 Cass Community Social Services in Detroit has expanded its Green Industries job training and permanent employment program — which focuses on those who might otherwise experience difficulty in finding a job  — with the addition of a new product to its lineup: Detroit Treads sandals.

“We have made mud mats from 35,000 illegally dumped tires, but we had a heck of a time coming up with what to do with the tread of the tire because it had a steel belt in it,” says the Rev. Faith Fowler, executive director of the Detroit-based nonprofit.

The Green Industries program, launched in 2007, includes a documentation destruction program as well as a department that creates coasters from repurposed wood and glass. The program will employ more than 100 people once the Detroit Treads effort fully takes off, Fowler says.

With the assistance of the College for Creative Studies in Detroit, the organization found a solution to remove the steel and has since employed five homeless veterans and unemployed youth to create the first batch of rubber sandals, featuring an Old English “D” engraved in the soles. After the program introduces the new product at a fundraising event next month, the sandals will be available for $25 a pair through the organization’s online store.

“(The program) started small and has really picked up steam over time,” Fowler says. “We offer not only job training, we offer actual jobs. And this program isn’t supported by government or corporate or donor money — we are able to hire people based on what we sell.”

To learn more about the “Catch the Fireworks with Cass … and Isiah Thomas!” event, when the organization will officially introduce its Detroit Treads offering on June 3, call 313-883-2277, ext. 203.