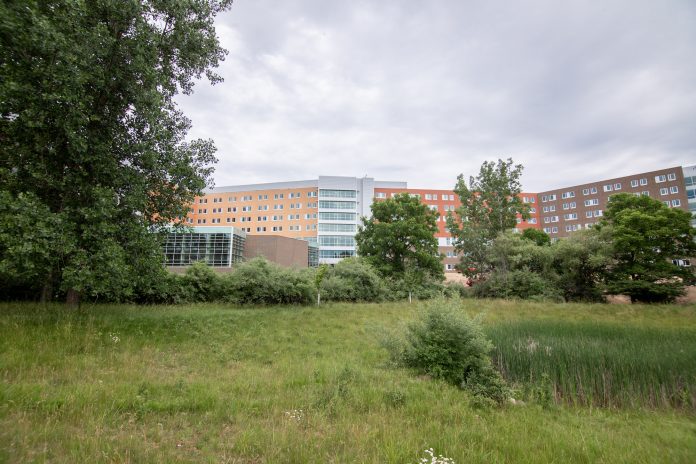 Responding to growing enrollment and increased demand for campus housing, Oakland University this week opened a $78-million, 289,000-square-foot residence hall at the south end of the campus which spans Rochester Hills and Auburn Hills.

The growth comes during a time of fewer high-school seniors in Michigan, with a projected decline for another decade.

The new Hillcrest Hall offers 750 beds — 183 four-person suites and 17 staff bedrooms for residence assistants. The dorm includes a 400-seat dining center and 200-seat attached multi-purpose room that can be used separately or in conjunction with the dining center, a 100-seat micro-restaurant and convenience store, and four general-use classrooms.

“We spent time benchmarking new student-housing facilities across the country, and with strong input from our student body, we designed and built Hillcrest Hall,” says Glenn McIntosh, vice president for student affairs and chief diversity officer at Oakland University. “I think what we ended up with what will be the standard of excellence for the college student living and learning experience for years to come.”

The dining area includes food eatery stations with options ranging from gourmet to traditional college meal and dessert choices. It also has a workout facility, a convenience store, classroom spaces, and social and study spaces that can also host evening and weekend activities and events.

The hall is the first to be built on the south side of campus and is the largest housing facility to date. It was funded by bonds.

A record number of students – more than 3,257 – are living on campus this semester. The university’s housing units are at capacity with a waitlist.

Student enrollment this school year is expected to be in the 19,000-19,500 range. The official count is slated to be completed at the end of September. There were 19,333 students enrolled last year, and about 2,700 lived on campus.

“This will also be our most academically talented freshman class, with an average GPA of 3.5 and SAT test score of 1130,” says James P. Lentini, senior vice president for academic affairs and provost at the university. “This year’s freshman class has students from 56 Michigan counties, 21 states, and 25 countries. More than 2,000 are from Oakland, Macomb, and Wayne counties, and nearly 900 are first-generation college students.”

The school’s Honors College is also welcoming its largest freshman class of more than 620 students. In turn, the Oakland University William Beaumont School of Medicine received a record 8,517 applications for its 125-member incoming class of 2018. The school, which is expanding its student center, is at full enrollment.