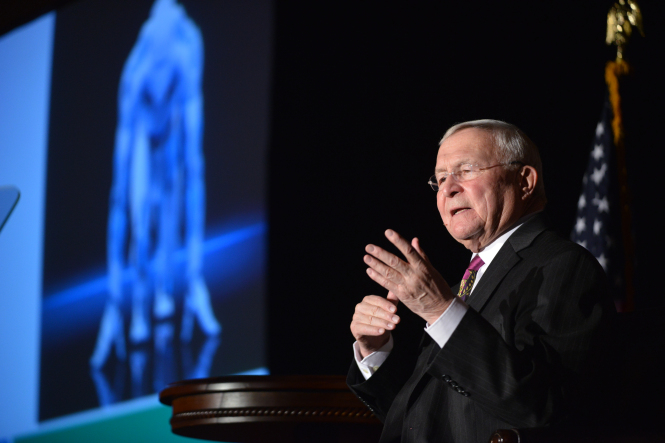 In his State of the County address on Wednesday, Oakland County Executive L. Brooks Patterson announced 2017 was a record year, with 62 companies investing $1.2 billion and creating 9,500 jobs, while retaining 8,400 jobs.

“That means more than one company per week is locating or expanding in Oakland County,” Patterson said in his speech. Twenty-seven of the 62 companies were international firms representing 13 countries and investing $305 million in new operations or expanding facilities. The countries include Brazil, China, Germany, India, Israel, Japan, South Korea, and others.

“That’s a big exclamation point since these countries represent some of the largest economies in the world,” Patterson said.

Patterson highlighted three companies in particular that contributed to what he called “one sizzling year.”

“These four campuses – one in each quadrant of the county – are where students can receive real-life training from instructors who actually work in their respective fields with state-of-the-art equipment that is currently used in their industries,” Patterson said. “Today’s campuses teach hands-on innovation approaches to talented students. I encourage both parents and universities to take a closer look at our professional career campuses here in Oakland County.”

Patterson introduced Southeast Michigan’s first off-road vehicle (ORV) in Oakland County. The Oakland County Parks & Recreation Commission is collaborating with the Michigan Department of Natural Resources to open the 235-acre park in Groveland Township this fall. Patterson also showed off the Oakland County Animal Shelter and Pet Adoption Center which opened in October on the county government campus in Pontiac.

Patterson also paid tribute to Oakland County Sherriff’s deputy Eric Overall, who was killed in the line of duty on Thanksgiving morning, and to deputy David Hack, who suffered a brain injury after being struck by a vehicle on Jan. 4.