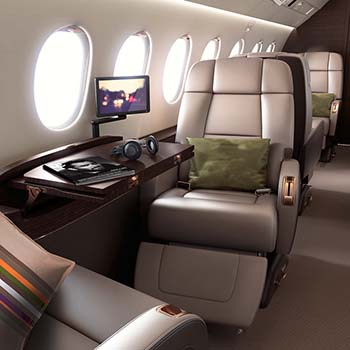 Pentastar Aviation, an aviation services company located at Oakland County International Airport in Waterford Township, now offers passengers the ability to connect to the Internet or their wireless networks during flights on its Gulfstream and Hawker aircraft.

“We continuously look for ways to ensure our customers’ aircraft is updated with the most innovative technology available in the industry,” says Greg Schmidt, president and CEO of Pentastar.

Schmidt says the Federal Aviation Administration certification of the two aircraft allows the use of activities on portable devices including email, phone calls, text, and video conferencing without interfering with flight-critical aircraft systems. The use of portable devices is allowed on Pentastar’s Hawker 800 and 850 XP aircraft, along with the Gulfstream Aerospace G-IV and GV series aircraft, which were previously issued for Wi-Fi compatibility.

Pentastar, owned by Edsel B. Ford II, was established in 1964 and provides services to aviation companies such as aircraft management and advisory services.