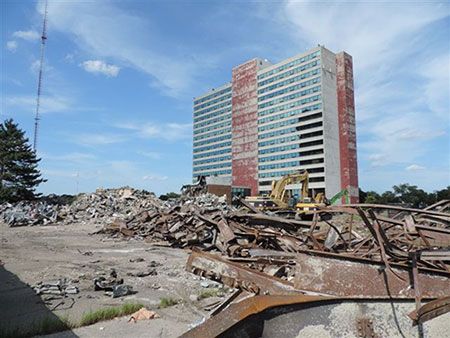 The demolition of a vacant Ramada Inn on Nine Mile in Southfield marks the end of an ongoing project between the city of Southfield, the Southfield Downtown Development Authority, and Oakland Community College.

“The final pillar fell last week,” says Al Aceves, executive director of the Southfield DDA. “Paint had been chipping off the side of the hotel (which had been vacant for four to five years), and it was just an eyesore for the community.”

The demolition’s completion follows the Southfield’s City Council approval for OCC to purchase the site, bringing the school’s total acquisition to about 10 acres. As part of the purchase agreement, the college agreed to cover the costs incurred in acquiring the property from the county for back taxes and demolition costs. In total, OCC paid $2.2 million.

Aceves expects that the property will be fully cleared within the next couple of weeks, after which it will remain vacant while the college makes plans for the property’s future use. “Once the school finalizes their plans — whatever they may be — my belief is we’re going to see increased student enrollment and an increased daytime population, which we sorely need,” he says.

The project began in September 2012, when OCC purchased about five acres on the east side of Rutland Drive, at Nine Mile, from the Southfield DDA.