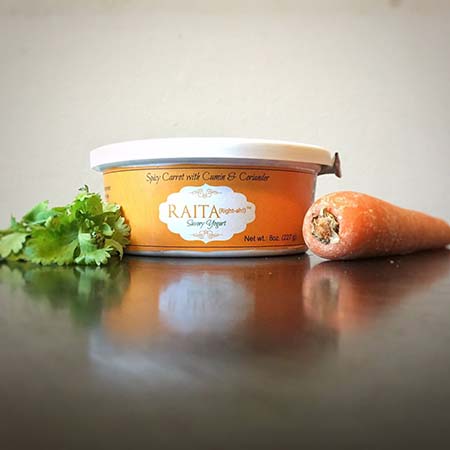 As more Americans turn to yogurt and unique food pairings, a Novi entrepreneur has launched Raita, a line of Indian-flavored savory yogurts now available at stores across metro Detroit.

“Where I’m from in India, we have to have yogurt with every meal,” says Harinee Sampath, founder of Raita. “Yogurt was becoming bigger, savory was becoming bigger, and bolder flavors were gaining more traction (in the U.S. market). All of that came together at the right time for me.”

Sampath says the yogurts come in three flavors: cucumber with cilantro and mint; spicy carrot with cumin and coriander; and tomato with coriander and cumin. Each serving is about 200 calories and has no pectin, gelatin, Xanthan gum, starch, or added preservatives.

She says the yogurt can be used as a dip, a sauce on sandwiches, wraps, or grilled meat or fish, or eaten alone. The milk is sourced from Country Dairy in New Era, north of Muskegon. The yogurt is produced in Hart.

Sampath thought of the idea for the company as a graduate student at the University of Michigan Ross School of Business two years ago.

“I’ve always wanted to be an entrepreneur, and I’ve always wanted to bring a part of Indian culture to the (United States) and make Americans more familiar with Indian (products),” Sampath says. “Americans occasionally go out to Indian restaurants to have Indian food but they don’t bring Indian food back home. I wanted to find a way I could incorporate it into American homes and I thought Raita would be a good way to do that.”

She says her goal is to launch a line of healthy Indian snacks and make Indian food more mainstream. The yogurts are available at Holiday Market stores in Royal Oak and Canton Township, along with the Produce Station, People’s Food Coop, and Argus Farm Stop in Ann Arbor.