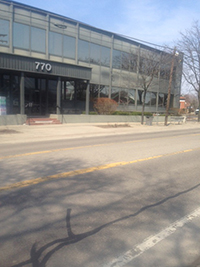 When Sean Ritchin left his job as a wholesaler at AXA Distributors to start his own financial business, he knew exactly where he want to set up shop.

“If you want to get into the financial industry in the wholesale business, you typically have to live in New York or Chicago, but I think (metro Detroit) is a great place to recruit young talent,” says Ritchlin, who opened Rock Harbor, a third-party marketing firm for mutual funds, in downtown Birmingham in February. “We’ve got a unique opportunity here.

“Typically, a mutual fund company works with external wholesalers in each state. So they might have people in all 50 states across the country that are selling (the mutual fund’s) products,” he says. “What we’re doing is building a call center that will partner with several mutual fund companies, and we’re going to create relationships through modern technology from (one location).”

By keeping wholesalers in one site, Ritchlin says the call center model can provide instant scale in the marketplace. “If you hire 50 people throughout the country, odds are you’re not going to be able to send a consistent message. In our call center, the minute information travels, it travels around the building,” he says.

Ritchlin says the company’s approach is partly based on a similar model used by Troy-based United Wholesale Mortgage, a branch of United Shore Financial Services with more than 1,200 employees. “We’ve been paying attention to their growth. They were the first 100-percent internal call center in the country, and now they’re the No. 1 (wholesale) lender in the country. We’d like to replicate the success they have had,” he says.

Ultimately, Ritchlin would like to employ more than 50 people at Rock Harbor and plans to hire at least 10 staffers by the end of the year. In the meantime, he’s building relationships with various money management firms, including NorthPointe Capital in Troy and others in New York and Florida.