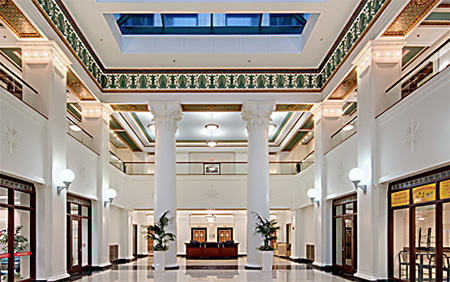 Northwestern Mutual Life Insurance Company has opened an office in downtown Detroit’s Chrysler House, marking the first time the company will have a presence in the city in nearly 40 years.

“I want to be where the action is,” says Jordon Wertheimer, a financial representative for Northwestern Mutual who’s heading up the initiative. “I want to sit down and have one-on-one conversations with as many people as possible who value taking care of their family, planning for retirement, and genuinely want to align their actions with their intentions.”

Wertheimer says Northwestern Mutual’s offices in Troy and Detroit are growing to meet a need in the marketplace for financial planning guidance. He says they’ll offer services such as planning solutions, as well as assisting with risk management, wealth accumulation, and estate preservation and distribution.

The new office, 719 Griswold, opened Monday. Wertheimer, who’s been with Northwestern Mutual since 2010, was previously at the company’s offices in Troy.

“There is a tremendous amount of positive energy being generated by the hard working men and women who live, work, and play in downtown Detroit,” Wertheimer says. “I believe I can provide them with financial guidance and do so proximately.”

He says the company has plans to expand its presence in Detroit in the future.