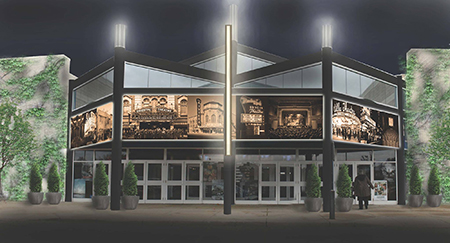 Riviera Cinema, a luxury, nine-screen theater with wall-to-wall screens and a cocktail lounge, will open next month in Farmington Hills.

The more than $1 million renovation of the former West River Theatre, at Nine Mile Road and Middle Belt, will reflect changes sweeping through the movie theater industry, says John Goldstein, managing partner of Cloud Nine Partners, the group that also remodeled the Maple Theater in Bloomfield Township. The cost of the upgrades were not disclosed.

“(The West River Theatre) was past its useful life and a lot of things have happened in the industry,” Goldstein says. The Riviera Cinema, scheduled to open May 6, will have will have fewer seats and more luxury options, including high-backed rockers and VIP reclining chairs, state-of-the-art film projection and sound, and other various amenities.

“It’s going to have a really beautiful bar, lounge, and eating area, (as well as) an array of foods — like a big pizza oven and a place to make sandwiches,” Goldstein says. “It will be a lot higher quality food than is normally at a movie theatre.”

Cloud Nine Theater Partners also updated the theater to make it handicap accessible, meeting the standards of the Americans with Disabilities Act.

“It was an old theatre, nearly 30 years old, so a lot of the ADA requirements were grandfathered on the theater,” Goldstein says. “By updating it, we were able to put in the proper ramps and seating in the middle of the auditorium instead of in a bad viewing spot. Now they are all the best seats in the house.”

Ron & Roman of Birmingham, an architecture firm that has designed various restaurants across Metro Detroit, such as the Chuck Muer restaurants and the Beverly Hills Grill in Beverly Hills, are in charge of the remodeling project.