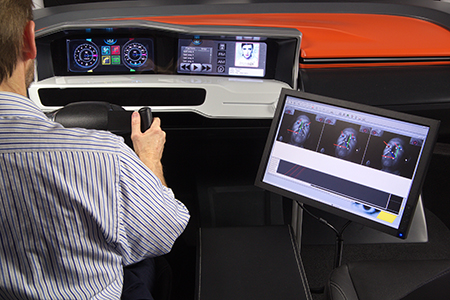 A driver’s eye movement may soon operate vehicle controls such as the radio, cabin temperature, and navigation system with new technology announced by Visteon Corp. in Van Buren Township.

The objective of the HMeye cockpit concept, which uses eye-tracking cameras, is to develop a way for drivers to operate vehicle controls while keeping their hands on the wheel, potentially mitigating distraction, says Paul Morris, innovation manager at Visteon.

“Advancements in camera technology, along with size reduction, have allowed the automotive industry to incorporate camera capabilities for in-vehicle applications at a reasonable cost,” Morris says. “This system showcases technologies that may lead the movement toward autonomous driving.”

A driver may select a control option on the dashboard’s home screen with a single glance. By looking at the iPod control, for instance, the driver can enter that program and then select song choices using manual controls on the steering wheel.

“The eye gaze feature and steering wheel controls provide fast response time,” Morris says. “This has the potential to improve safety by minimizing the driver’s eye movement away from the road and keeping his or her hands on the wheel.”

Morris says the concept has received interest from auto manufacturers as well as vehicle owners. Prior to the final build of the concept, Visteon presented an early version to consumers at a research clinic, where 81 percent of respondents felt that the system was easy to operate and 78 percent found it enjoyable to use.