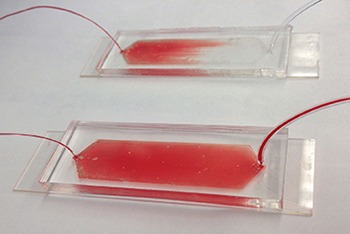 A new medical device developed at the University of Michigan in Ann Arbor may soon provide a non-invasive method to monitor the progress of a cancer treatment.

Sunitha Nagrath, assistant professor of chemical engineering at U-M and a developer of the device, says the technology selects cancer cells out of a blood sample and releases them later, enabling tests that can show whether a therapy is ridding a patient of cancer cells.

Nagrath and other U-M researchers pioneered the technologies for capturing cells from blood samples. The devices trapped cells on chips made with graphene oxide, a single layer of carbon, and oxygen atoms. However, she says the analysis had to be done on the chip because the cells were stuck.

“We could grow the cells on the chip or analyze them all together, but research has shown that cancer cells are not all the same,” Nagrath says. “Hence, it is important to study cells individually, and our new device makes this possible.”

She says the device can capture and release up to 80 percent of the cancer cells in the initial blood sample. Clinicians then collect the cells into a sample for analysis, which can reveal the proportion of captured cancer cells that are stem cells. They may also identify single cells for more detailed study, such as full genetic sequencing or tests that identify which drugs would be most effective.

“Because the device is easy and cost-effective to make, large-scale clinical studies are possible,” says Jinsang Kim, professor of materials science and engineering at U-M who co-led the project with Nagrath.

Kim says U-M is currently pursuing patent protection for the technology and is seeking partners to bring the device to market.

The device is described in the paper Tunable Thermal-Sensitive Polymer-Graphene Oxide Composite for Efficient Capture and Release of Viable Circulating Tumor Cells in Advanced Materials.