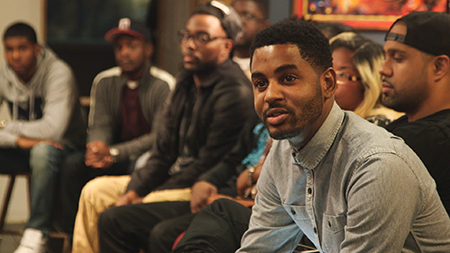 The Social Grooming Co., a barber shop in Detroit’s Midtown district, is one of three businesses featured in Growing America: A Journey to Success, a new HLN TV series that premiered Sunday.

Hosted by Ty Pennington, best known for Extreme Makeover: Home Edition, the six-episode series follows one week of MBAs Across America, a summer program that takes MBA students to six different cities over a period of six weeks, during which they offer their business expertise to local entrepreneurs.

“We’ve always known what we wanted to do, we just didn’t know how to do it,” says Sebastian Jackson, owner of The Social Grooming Co., at 5272 Third Ave. “And that’s what MBAs Across America offers. They come in and understand certain principles of business that we can take and apply to our own business.”

In Jackson’s case, he knew that in order to further his mission as an environmentally sustainable barbershop that also serves as a meeting place for members of the community to discuss issues affecting Detroit, he needed to expand to further locations.

“The more hair we cut, the more hair we have to use in compost to grow trees,” Jackson says. “And the more shops we have, the more people we can connect to each other. And if we connect those people, we believe together, we can create change and impact.”

And with the help of the MBA program, which he was also part of in its inaugural year in 2013, Jackson is now pursing different investor opportunities so he can secure both the financial and intellectual capital needed to open two more shops within the next two years. He’s currently looking at West Village and the Livernois, Six Mile area as potential locations.

He says that the new docu-series brings his business a level of credibility he didn’t have before. “This is more than us building our brand. It’s affirming that a brand like ours, our guidance and beliefs is in alignment with brands like HLN and Holiday Inn (a partner in the MBA program and Growing America series).”

After each episode airs at 9 p.m. on Sundays, viewers can vote for the most inspirational business on the show at HLNtv.com/GrowingAmerica. The two other businesses in the running include Spark Relief in Denver and The Root Café in Little Rock, Ark. The winner will be announced during the show finale, set to air Dec. 21. â€‹