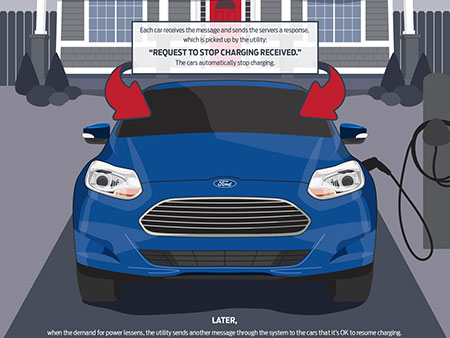 “This first-ever test is a critical milestone as we move forward with our collective goal to advance electrification and boost the environmental benefits that come with that,” says Mike Tinskey, global director of vehicle electrification and infrastructure at Ford Motor Co. “Our intent is to add more capability to this technology, so that it may be used broadly in the future.”

There are approximately 296,000 electric vehicles in the United States, but demand is expected to rise drastically over the next decade according to Navigant Research.

The software technology, developed by Japan’s Sumitomo Electric, will allow utility companies to send messages directly to the vehicles, asking them to stop charging temporarily as a way of helping a grid that is becoming overloaded.

Utilities such as DTE Energy will offer customers financial incentives to opt into the program.

Customers who make their vehicles available to the grid can charge their cars at a location of their choice and have the ability to ignore the utility’s request to stop charging.

While Americans have not yet adopted electric vehicles in high enough numbers, there is a growing concern in the industry that as more consumers choose electric vehicles demand on regional power grids during peak evening hours may eventually overwhelm systems.