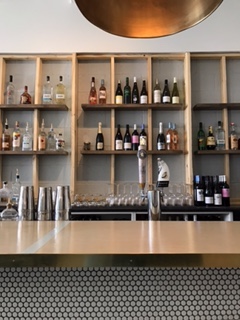 “The name Voyager points to a fresh frontier for seafood in metro Detroit. I’d like our diners to be transported to a new place with our food, beverage, and hospitality,” says Boyer. “This restaurant is a truly a labor of love for all of us.”

The restaurant will feature a raw bar serving ceviches, crudos, and a rotating fleet of oysters served on the half shell, fried, dressed, or grilled. The oyster program is being procured by Toola and Jackson from coastal shellfish farms, including Island Creek in Massachusetts, Murder Point in Alabama, and Taylor Shelfish and Hama Hama in Washington.

The beverage program features two draft beers, an array of packaged craft beers, and a fish-friendly wine list with several high-acid and high mineral varieties. Cocktails will include a twist on the classic Mai Tai with a blend of Jamaican and navy-strength rums, homemade hazelnut syrup, and tangerine liqueur.

Designed and built by Five Eighths Architecture in Ferndale, the 1,400-square-foot restaurant features a white interior with splashes of aqua and coral for a nautical vibe.

The restaurant will be open Tuesday-Thursday from 4-10 p.m. and Friday and Saturday from 4-11 p.m. Happy hour specials, including $1 oysters, are available daily.