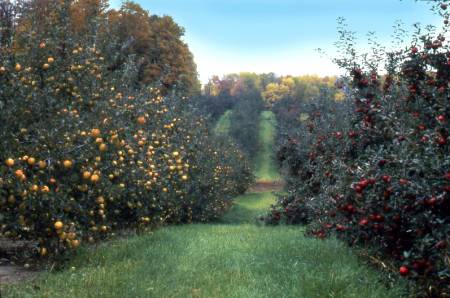 “It’s about making sure our growers have the tools they need in their toolboxes to be able to continually grow great fruit in this state,” says Diane Smith, executive director of the Michigan Apple Committee.

The Michigan Tree Fruit Research & Development Program, to be administered by a committee of nine members appointed by Gov. Rick Snyder, will aim to improve the state’s tree fruit industry by supporting its research stations and extension programs.

Smith, who participated in a task force that supported the program’s creation, says the original idea was to raise up to $500,000 through assessments on apples, cherries, peaches, and plums, although the amount may change based on who’s appointed to the committee.

The funding would ensure the continued assistance of Michigan State University Extension agents, who work with growers to identify problems and provide solutions to everything from pest management to succession planning. “We want to make sure that these positions are there for our growers into the future,” Smith says.

“The main issue for these (research) stations is their funding has been drastically cut over the years, and we need the critical research they’re doing there to be done at the stations,” says Smith.

For example, the stations may research effective ways to combat diseases that can affect plant life and fruit production, Smith says. “You don’t want to spread some disease on a farm (for research purposes). You want to do it at these fruit stations, where there’s not going to be some negative long-term effects over the years,” she says.

Douglas D. Buhler, director of Michigan State University AgBioResearch, says the school looks forward to working with the tree fruit industry to strengthen its research and outreach programs at the research centers, which it oversees. “These facilities are critical to our mission to support the tree fruit industry and this partnership will help insure their viability in the future,” he says.

What differentiates the program from others is the fact that it’s supported by multiple industries, Smith says. “It makes sense to work together. If a grower grows apples, they probably grow peaches or plums or cherries as well.”

Michigan’s agricultural industry contributes $91.4 billion to the state economy and employs 923,000 people, according to Pure Michigan. Farmers in the state grow and raise more than 300 varieties of food/commodities, making Michigan the second most agriculturally diverse state in the country, second only to California, says Jennifer Holton, spokeswoman for the Michigan Department of Agriculture and Rural Development. She adds that the state ranks first in the production of tart cherries.